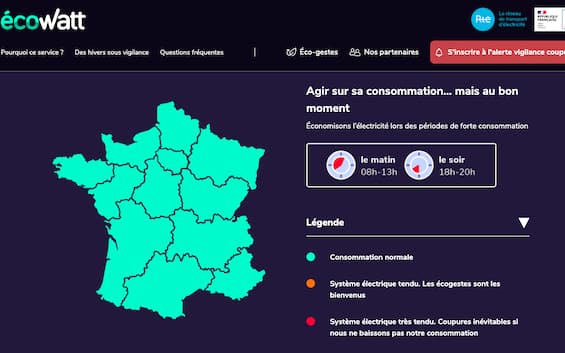 The new French system to show citizens the level of electricity available in the various regions is called “Ecowatt”. Faced with the European energy crisis, public television (France Télévisions) introduced the “electricity weather forecast” together with the energy giant RTE. A mirror that will accompany the classic weather forecasts to alert citizens to possible electricity cuts in their departments.

The colors of the energy emergency

The French map will be colored in real time with green, yellow or red: green indicates normal consumption and availability, yellow a stressful situation and red a probable cut in electricity distribution due to excessive consumption. An extreme situation which, according to Ecowatt, shouldn’t occur more than a couple of times during the winter. Next to the map there will also be some tips for good practices to follow, in particular during peak consumption times, i.e. between 8 and 12 in the morning and between 18 and 20 in the evening. Finally, it is possible to subscribe to an alert system, through the Ecowatt website, to receive an SMS when your department enters the yellow or red level.

The goal, explained the partners of the initiative, is to sensitize citizens to reduce consumption. Already at the beginning of September the French government asked, first to companies and then to private individuals, to cut their needs by 10% in the name of “energy sobriety”. While waiting for the government to release the details of its national reduction plan in mid-October, several municipalities have already launched local savings plans. Paris, for example, in addition to lowering the heating in public buildings and turning off the illuminated signs after 1 am, has anticipated the turning off of the lights of the monuments including the Eiffel Tower, which from 23 September becomes dark starting at 11 pm, 45 (instead of 1 am).