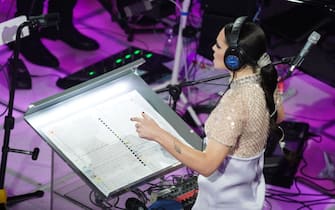 On the stage of the 72nd edition of the Sanremo Festival, Francesca Michielin conducted the orchestra. The singer, in fact, is completing her studies at the conservatory. “I am honored to confront myself with an orchestra of great masters and to experience the festival from another perspective, orchestrating, learning, experiencing with the musicians the dynamics and interpretation of a piece that will make you move” she said.

Because Francesca Michielin conducted the orchestra during Emma’s performance

Francesca Michielin’s talent was discovered thanks to X Factor, a talent from which she was the winner in 2011. Francesca was part of the “Under Donne” team, at the time led by Simona Ventura

Treads the Ariston stage for the first time on the occasion of the duet evening of the 2012 Sanremo Festival, interpreting the song “Al posto del mondo” alongside Chiara Civello

Sanremo 2020, all the photos of the final of the Festival. PHOTO

After releasing her first studio album “Riflessi di me” (2012), under the artistic supervision of Elisa, Francesca Michielin collaborated on Fedez’s single “Cigno nero” (double platinum). The collaboration with the rapper was then renewed with another great success, the single “Magnifico” (2014, six platinum discs).

The singers of Sanremo 2022, Emma Marrone on the stage of the Ariston. PHOTO

In 2014 Francesca Michielin was chosen as the only Italian artist for the soundtrack of the film “The Amazing Spider-Man 2 – The power of Electro”. His song is “Amazing”

Sanremo 2022, fourth evening: guests and singers in the competition

In 2016 Francesca Michielin returns to the stage of the Sanremo Festival, this time as a protagonist with the song “No degree of separation”. The song ranks second on the podium

Francesca Michielin, In your eyes: text and video of the new song

Following the refusal of the Stadio, winners of Sanremo 2016, to participate in the Eurovision Song Contest, Rai chooses Michielin as the Italian representative. The singer performed in the competition in Sweden with a bilingual version (Italian and English) of the single from Sanremo, “No Degree of Separation”, finishing sixteenth

His “Almeno tu”, a song from the album “di20” (2015), is chosen as the main theme of the film “Feather”, directed by Roan Johnson. In September 2016 Francesca participates in the presentation of the film during the 73rd Venice International Film Festival.

On January 12, 2018 “2640”, third album by Francesca Michielin was released with the collaborations of Calcutta, Dardust, Tommaso Paradiso and Cosmo for lyrics and music of the songs. In the double vinyl reissue, released on 7 December 2018, the singles “Fotografia” in feat. with Carl Brave and Fabri Fibra (triple platinum record), the unreleased Femme and the first version of “Tropicale”.

In February 2020 Francesca returns to the Sanremo Festival for the evening of duets: she and Marie Antoinette flank Levante (artist competing among the big names) in the cover of “You can give more”. On March 13, 2020 Michielin’s fourth studio album is released: “FEAT (State of Nature)”, 11 tracks, each with the collaboration of a different artist

Francesca Michielin at the Concertone of May 1st 2020: “This year I’m going back to May 1st and it excites me a lot because we are preparing something really really beautiful.” Work ennobles man “, and music is a source of beauty and work. Never as this year is it right to play to draw attention to the world of entertainment and the dignity of the workers who are part of it. The special thing for me is that I will play from an incredible corner of my Bassano del Grappa, that this opportunity has allowed me to embrace ”

In 2021 he participated in Sanremo with Fedez: their “Call me by name”, immediately shot to the top of the rankings, ranks second after “Shut up and Good” by Maneskin