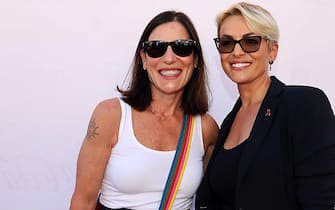 Almost two years after the first photos that portrayed them together, for Francesca Pascale And Paola Turci they said the fateful “yes”: the rite for the civil union was held on 2 July, in Montalcino, in the Sienese hills. Then the very private party at Castello Velone, Val d’Orcia. From the relationship with Silvio Berlusconi to the union with the Roman singer-songwriter, here is the story of Francesca Pascale

Paola Turci and Francesca Pascale, today the wedding in Tuscany

July will be a month of celebration for Pascale, born in Naples. In addition to celebrating the wedding with Paola Turci, on July 15th it will also shut down 37 candles

On several occasions over the years she has been credited with a past as a show girl. An inaccuracy, Pascale herself told in 2009 al Corriere del Mezzogiorno: “Not at all showgirl, I have participated in some beauty contests “. Among them, the selections for Miss Italy And Miss Grand Prix

Paola Turci, career and private life of the singer. PHOTO

If the Miss Grand Prix sash eventually won, perhaps Pascale’s biography would need to be rewritten. From the beauty contest the passion for politics is born. The producers of Miss Grand Prix, Pascale said, “agreed” to win another competitor. An injustice that led her to want “a fairer world”

Still among the desks of the Palizzi art institute in Naples – of which he was an institute representative – Pascale met the former coordinator of Forza Italia for the Campania Region, Antonio Martusciello. In 2004 you are one of the founders of the committee “Silvio we miss you“, In support of Berlusconi, for whom Pascale inherited from his parents” atrue worship” (pictured, Pascale in 2006)

The most beautiful songs of Paola Turci

Pascale, still 20, enters with the PDL in the provincial council of his city, to exercise the delegation to Sport and Entertainment. In the 2006 L’meeting with Berlusconias told in the book “Italians volta gabbana “ by Bruno Vespa in an extract reported by The print in 2014: “With four other crazy ‘Silvio we miss you’ we were in Rome when they told us that he had a meeting at the Duke Hotel dei Parioli. We rushed there ”

A telephone correspondence begins between the two. “I had set her number to Gianna Nannini’s song on her cell phone ringtone You are in the soul“, Pascale later recounted. In 2012, Berlusconi confirmed the rumors: Pascale is officially his “girlfriend”

In 2014 he founded the association “The colors of freedom”, Against violence against women and for the promotion of the rights of those who are not heterosexual (in the photo, Pascale on the occasion of his membership in Arcigay and Gaylib, Naples, 2014)

In the spring 2020 Pascale and Berlusconi announce the break. Only a few months later, the weekly Today publishes some of his photos on a yacht with Paola Turci

It is the period in which Pascale lashes out on social networks against the representatives of the right-wing political area for their obstruction against the Ddl Zan, also participating in various demonstrations in favor of the decree, which was later sunk. In 2021, interviewed by The morningPascale reveals that she can no longer be an electrician of Forza Italia, because she is too distant from her positions on the subject of rights (in photo, Pascale and Vladimir Luxuria, 2021)

Gossip and rumors about their relationship – never confirmed and never denied – last about a year. It is July 3, 2021 when Pascale and Turci appear together with the Pride of Naples. Now, the wedding. For Rolling Stone “They are the Italian Jodie Forster & Alexandra Hedison”

Paola Turci and Francesca Pascale, as scheduled, they said yes in the afternoon of July 2 in Montalcino (Siena): the rite for the civil union was celebrated in Palazzo dei Priori. The very intimate ceremony lasted about twenty minutes: about 25 guests including 4 witnesses, no VIPs. The couple arrived in a white Jaguar. Both in trousers and white, Francesca Pascale wore a blazer, Paola Turci a jumpsuit with thin straps and embroidered bodice