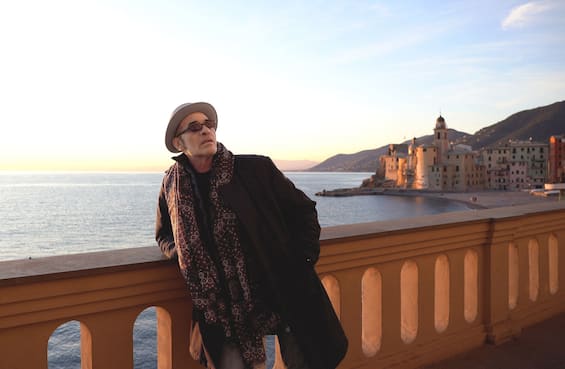 Navigator of you it is a suggestive, dreamy, evocative piece and the musical accompaniment of the string quartet and the acoustic guitar amplifies the sensation of being transported on a journey on the long waves of the sea. It seemed natural to me that the video should be as discreet as possible and at the service of the emotion I wanted to convey in the song: when the images in the text are so clear, I don’t like the video distracting the listener from his own inner world. For me it was therefore clear that the video clip should be set on a beach with the constant presence of the sea. In December we had a concert together with Alter Echo String Quartet it’s at Michael Cusato in the beautiful theater of Camogli, a perfect opportunity to shoot images in the bay of the same name. Furthermore, the musical universe of the piece evokes, for me, a winter sea, the fact that we were in December was therefore a plus point. I called Michele Burgay – the director with whom I just finished the docufilm “You didn’t understand anything” on Luigi Tenco which will be released in the spring – and I spoke to him about the project. He was immediately enthusiastic about it and, together with my Art Director, we had fun imagining many solutions to make the video fit the sound setting of the song.

When we arrived on site, however, we were totally enraptured by the sunlight reflecting on the sea and on the faces that – after days of intense cold – relaxed serenely. So we left the program alone and instead improvised small choreographies on the beach and on the pier, a playback on the sunset promenade, and, thanks to the drone, we could also literally fly together with the seagulls and propel ourselves towards the horizon. Then, in the post-production phase, almost with regret we decided to dampen that crazy light that was there: the colors were too bright, too contrasted, the cameras mounted with the right lenses today have such a high sensitivity and definition that in this context seemed almost disturbing to me. In the final version, therefore, the sea and the sky have pastel tones to give a cinematic patina to the video and remain in a gently poignant world.

This song is the first single that anticipates the album Bows and Arrows coming out in April, a thick all-acoustic record that we recorded at Digital Lake Studio two months ago. There is always a particular magic when recording a disc, so we decided to insert a sequence taken during the recording of Navigator of you. I liked the idea of ​​showing the performance of the quartet, the concentration of the girls, the moving bows, the skilful accompaniment of Michele’s guitar (who also took care of the arrangements) and also the small room where the voice is recorded, what a view from the outside through the glass it looks like they are inside an aquarium! Combining the studio shots with those of the sea was a happy idea, I hope that even those who see this video can vibrate together with our strings and let themselves be carried away as by the warm sea currents.