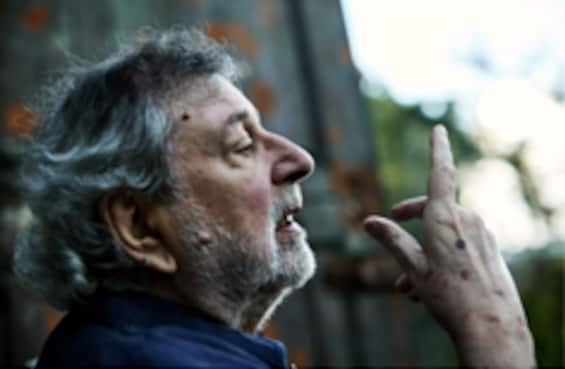 A special but romantic project. Although the songs range from the dead of Reggio Emilia to that idea(s) called anarchy. Undoubtedly Canzoni da Intorto is a unique project of its kind, it is the concept album of the soul that Francesco Guccini has always wanted to make and which now finally comes to life, surprisingly giving us his voice and, once again, a piece of history . Composed of eleven songs belonging to popular culture, with arrangements with a Balkan and folk appeal, Canzoni da Intorto is a piece of Francesco Guccini’s heart, here arranged and interpreted in a new guise. Fragments of Italian and international music poetry with which the singer-songwriter from Pavana has given life to a sort of musical biography, a work of cultural, almost educational value.

Francesco how the songs they compose were chosen Songs from Intorto?

I start by telling you that it’s a bad day, 16 of them have already interviewed me with the usual 16 questions and one is this. This crazy operation that was born a long time ago. Many years ago I wanted to make a cover album but I found resistance and it never happened. But I would have chosen very different songs, this time I chose the ones sung with friends in the few convivial meetings I had lately. They are those of a nightlife made up of card games where we have never even played a cup of coffee; but first we sang. They are the ones I proposed when they asked me to make this album. The only thing I’m not responsible for is the order in which they appear on the disc.
You enjoy exploring the world of dialects.

Milanese and Modena are distant cousins. There is also one in Piedmontese dialect, Barun Litrun, and they tell me it’s not bad. I gave up on the ones in French because I once tried Jacques Brel and a friend told me to leave it alone. Consider that they are all songs that I learned by listening to them.
Intorto is a synonym of seduction. Even a star like you needed a guitar to…twist girls?

I’m not a star but a poor cog***ne which is another story. The idea of ​​songs from intorto comes from an intuition of my wife Raffaella during a dinner with BMG. It comes from the idea of ​​marginal songs: the message is that I sing it to a girl who has never heard it, maybe it’s a Piedmontese song from the 18th century and here the twist arises because you show that you’re a jock and that you don’t sell bullshit .
THE Deaths of Reggio Emilia you have lightened it with an almost dancing musical guise.

I am not responsible for the arrangements which I judge to be beautiful and intelligent and I have enjoyed them.

Many passages use strong words, they are not neutral: today there is another color that governs us, have you thought about it?

When I made the record you could tell what was going to happen but it wasn’t there yet. Here I show my point of view in a serene way, I’m glad it’s of a certain type even if I already sang those songs some time ago. You know in seventh grade we studied the Iliad and there was a small group in the classroom who were rooting for the Trojans, who were the losers, I was one of them still rooting for the Trojans today. Come to think of it, they’re all loser songs.
But do anarchists still exist?

I’m not anarchist but I feel close to them, it’s a romantic idea. I’ve always been an anarchist sympathizer but you’ll agree with me that in 2022 it’s hard to be. Was the railwayman of my song, The Locomotivebut let’s talk about another era.
Songs from Intorto will only be released in physical format. Why no platforms?

I don’t know what streaming is, so it’s not my fault. Apart from the last two albums, I’ve never even presented my records, I’m a bit old-fashioned.
Today the world of recording is constantly changing.

I hope that a pitiful veil falls on the songs of my 18 years. The first ones were sung by Equipe 84 and then by the Nomads. God is dead it’s my first song as a member of Siae. I wrote because I liked writing, if they hadn’t been successful I don’t know if I would have continued. They chose them by chance, because I was a friend of Equipe 84 and the arranger of Nomadi.
In Italian politics the tricolor flame is still lit in the symbols: what do you think?

They didn’t remove the tricolor flame but they declared themselves against totalitarianism. According to Professor Alessandro Barbero, Stalinism is incomparable to Nazism, because communism had one more reason for hope. I don’t like that there is still a flame but the Italians seem to be happy, we’ll see. The American tanks were a great hope for democracy and I hope that somehow we proceed in that direction in the sense that I hope we can move forward with the strength of ideas and democracy. Fascist songs are often stupid and rhetorical but two are interesting because they have that bitterness which conveys the sense of defeat and are Women no longer love us because we wear a black shirt And The festival of Giarabub.
Do you have new songs ready or in the works?

I stopped writing songs with The last Thule, I’m no longer capable of it, I stopped so as not to have to look for something that no longer came. I no longer play the guitar and therefore I can’t compose. I never said I would never sing again but that I would never write songs. This record happened and it was almost a bet that intrigued me.