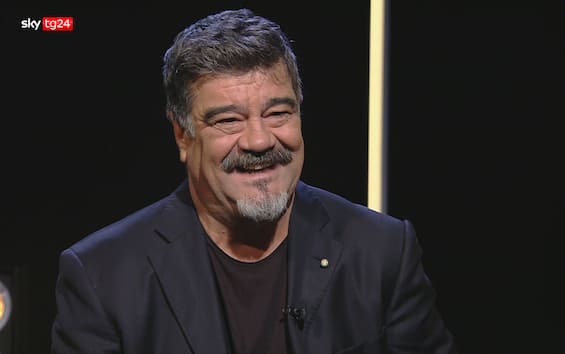 IS Francesco Pannofino the protagonist of the new episode of “Stories”the series of interviews with the main interpreters of the show by Sky TG24. Guest of the Deputy Director of the newspaper Omar Schillacidirected by Roberto Contactsthe actor tells himself in “Quality according to Francesco Pannofino”on air Thursday 27 October at 9 pm on Sky TG24 (in rerun on Saturday 29th at 9pm and Sunday 30th at 3pm) and always available On Demand. A journey in his long career between the love for football, the memory of Aldo Moro, Forrest Gump and above all the return of Renè Ferretti in Boris 4.

Waiting for the fourth season of Boris

Twelve years after the third season and eleven after the film, the awaited fourth season of the cult comedy series has arrived Boris to tell once again, with a language outside the box, the behind the scenes of the world of Italian cinema and television. Written and directed by Giacomo Ciarrapico And Luca Vendruscolo it’s available from 26 October on Disney + with all eight thirty-minute episodes produced by The Apartment, a Fremantle company. “The first season aired in 2007, then we did three – Pannofino recalled -. We made the movie. Then, unfortunately, Mattia Torre passed away, who was one of the three authors of Boris. And then we too, all of us, had resigned ourselves to the idea that the adventure was over now. Then instead, miraculously, good things always re-emerge and we did the 4th season, naturally adapting it to the times: there is the platform for example. And therefore also with the modernity of the protocols, the codes of conduct, the characters of Boris grappling with these innovations. In this fourth season we are in Cinecittà ”. “I think those who love Boris want to see the characters they are very fond of again. Here, paradoxes are created that are really very, very funny“.

The 40-minute chat, with amusing features, in addition to telling in detail the series and the over-the-top character of Renè Ferretti, retraces some of the fundamental stages in the life and career of the actor. Starting from its roots: “We are in Liguria, in Pieve di Teco, a small town in the western Ligurian hinterland, in the province of Imperia. My father was a carabiniere and served there and then he got married to my mother and from Puglia, both from Puglia, they went to live there and my brother and I were born. I went to kindergarten there. Then in first grade my father was transferred to Imperia and then I went to elementary and middle school. Then further transfer to Rome. I was 14 and from there I am Roman “. When I was a child: “I loved playing football, I still love it now but the results are probably not excellent, I played well enough I was a bit obsessed and spent so much time. Then there was the school. I loved playing football, being with friends “. As a young man he would have liked to do “the player but the one who goes to the World Cup, scores Italy at the last minute and makes them win the World Cup. I was good but I wasn’t a tightrope walker and then I didn’t have the body“. A particular episode during the university period when he witnessed the ambush in via Fani and the kidnapping of Aldo Moro: “I lived in via Mario Fani, where my mother still lives. That morning I was on my way to take the bus to go to the university because there was the algebra lesson which would be the first exam I was supposed to take. I passed there at the intersection where the incident happened. After twenty meters I stopped at the newsstand and bought the newspaper. I was looking at the front page and the gusts started. I ran away on the other side, then I came back. I saw the massacre in via Fani ”. “Those were really difficult times.” And then the job of voice actor: “At the beginning there was only Rai. There were only the Rai channels and the cinema to do the dubbing, so there were about 200 voice actors throughout Italy. Then there was this turning point of private TVs that bought material from South America from all parts of the world, from Canada, Sweden and then came these series, cartoons, even some ugly soap operas, but which gave us 1500 episodes and there ‘there was a need for camel troops to be voice actors. And I found myself in that delivery, let’s say that voice actors from 200 turned into 2000“. Passing through the voice of George Clooney in Ocean Eleven (“A stellar cast, all very famous actors. And then George was strong in that film because he was nice but at the same time determined. He was the leader of this gang“) To Malcolm X’s Denzel Washington:”Great movie and great Denzel, a great actor. I’ve dubbed it almost 30 times. I don’t know the exact bill. He is one who suggests you how to say the joke from the eyes, with the look it makes you understand what he thinks. It’s not easy. I grew up with him because I double him for a long time. I had to play Malcolm X and I remember that it was a huge effort, because he made the rallies, he spoke at 300 per hour, keeping up with him was not easy “. And Forrest Gump’s Tom Hanks: “he had this way of speaking a bit like that. He used a lot of the Alabama accent which is not reproducible in Italian. So it was necessary to find a characterization in speaking ”. And when asked what else he would like to do in life he replied: “Look, the truth is that I am so happy and happy with what happened, that it would be really unfair to ask for something more ”.