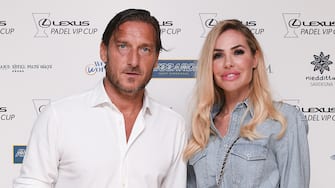 Francesco Totti and Ilary Blasi separated by mutual consent. They announced this on Monday 11 July in a joint press release. The former footballer and TV presenter, married since 2005, have three children: Christian, Chanel and Isabel.

Totti and Ilary are separating? A joint press release is expected

Francesco Totti and Ilary Blasi met in 2002. He, after ending his romantic relationship with the showgirl, model and actress Maria Mazza, is struck by the proverbial love at first sight.

Loves over or in possible crisis: from Hunziker and Trussardi to Totti and Blasi. PHOTO

The first meeting between Ilary Blasi and Francesco Totti takes place in 2002, in the presence of the showgirl’s sister, Melory.

Nothing more happens between the two than a greeting with the customary presentations.

Francesco Totti, however, wants to conquer her, so he begins to court her.

He invites her to the Olympic Stadium to watch the derby. It seems that initially Ilary Blasi declined the invitation for work reasons, but then he would have surprised the future husband by appearing in the stands of the stadium

Find out all about Francesco Totti

Francesco Totti scores during the game. He heads towards the south curve to cheer on his fans and lifts the yellow and red jersey

Ilary Blasi and Francesco Totti celebrate 16 years of marriage: the most beautiful photos

Happy birthday Ilary Blasi, the photo story of the presenter

It was clearly a loving message to her. From that moment the two have become romantically linked

I hoped de died before: the review of the last two episodes of the TV series on Totti

In 2005 they decide to get married. He makes the marriage proposal to her during dinner in a restaurant in Santa Severa, a seaside resort in the province of Rome

“When we arrived it was dark, it seemed closed and he scolded me. As soon as he opens the door of the car, Celentano’s song with which we met (“The emotion has no voice”) starts and inside the restaurant he finds pink petals on the ground that reached the table. We were alone and halfway through dinner I made her the marriage proposal. There were actually three of us, she was pregnant with Christian ”, said Francesco Totti.

‘I hoped de died before’, characters and actors in comparison. PHOTO

The ceremony is held on June 19, 2005. The wedding is broadcast on Sky. All proceeds from the television rights were donated to charity

Five months later, the couple’s first child, Cristian, is born. The firstborn was born on November 6, 2005.

On May 13, 2007, the second daughter of Ilary Blasi and Francesco Totti was born: Chanel

Francesco Totti and Ilary Blasi are not just a couple in life: they are also an entrepreneurial couple. The two co-founded the Never Without You clothing line.

Among the many things done together, in 2006 they participated together in the Italian dubbing of an episode of the television series The Simpsons