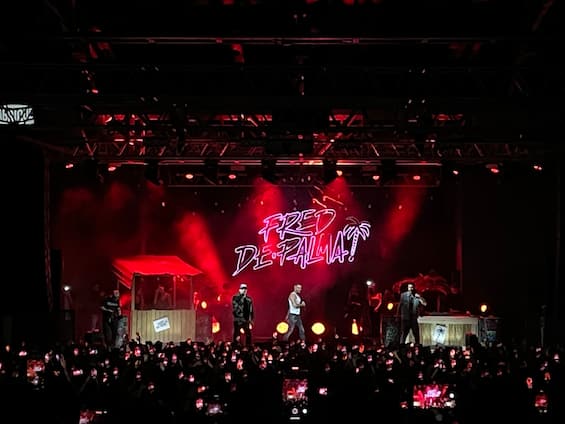 In his career, Fred De Palma has obtained many awards. But no platinum or gold record can ever replace the love and support of the public, which can only be touched with a live concert. And this is what happened at the Fabrique in Milan, where De Palma’s live, in addition to being an unmissable party, turned into a hug to each of those present. “I would like to stay with you all night” repeated the artist several times during his show, almost as if he didn’t want to leave each of those present even for a moment. And so it was. Because De Palma, in almost two hours of concert and thirty songs (with medley and surprises) never lost sight of who was there with him, ready to sing and move to the rhythm of the melodies reggaetonere. But not only! Because, together with friends Emis Killa and Lazza, Fred was unleashed in a freestyle that the public followed in time (and with lots of applause).

No one on the sidelines, no one in silence

On stage two kiosks that, if necessary, distribute shots of tequila. Palms. Reggaetton ballet flats. And for a few moments we ask ourselves: “Are we really in Milan or did Fred De Palma take everyone to Copacabana?” Yes, we are at Fabrique, but with the rhythms and atmospheres we have been catapulted to South America. Also thanks to the successes (and not only in Italy) of the collaborations with Anitta, Justin Quiles, Sofia Reyes and Ana Mena which guaranteed Fred an important place in the Latin market, positioning himself among the few Italians on the podium of the most listened to singles in a foreign country. .

His concert is a journey through time and space, and every now and then some friends arrive on stage to make an evening that is already magical even more beautiful. The first surprise is Baby K, who sings “God bless” and confirms that in addition to a musical collaboration, with Fred De Palma there is an indissoluble bond of friendship, which makes the music created together even more special. The second part of the concert is a riot of surprises: first Emis Killa, who with Fred shares the stage on the notes of “Tutto che ho”, then Boro Boro with “Uebe” to which VillaBanks is added for “El amour”. Not even time to recover when Rose Villain arrives and intones “Au revoir”. Then the notes of “Mala” start and Lazza bursts into the Fabrique, amidst screams and applause that never seem to end. And then, another surprise: a freestyle between Killa, Lazza and De Palma. Even here one wonders? But did Fred transport us to another part of the world? No, it is not necessary. Because the talents are here, in Milan. Telling what they have managed to do is not easy, but we limit ourselves to using an adjective: explosive, which gives the idea.

The last part of the concert, in which De Palma brings a fan on stage with whom he sings one of his hits (De Palma read his sign “since 2016 in the front row only for you, let’s sing a song together”), is dedicated to the hits that have been the soundtrack of recent summers, from “Paloma” with Anitta to “D’estate non vale” with Ana Mena. The closing, which sounds like a goodbye, is with “Extasi”, which gives an appointment at next live, in Rome on September 25. Waiting for the next dates and the next parties at the rhythm of De Palma!

All I’ve got – with Emis Killa

Freestyle with Lazza and Emis Killa

It is not valid in the summer