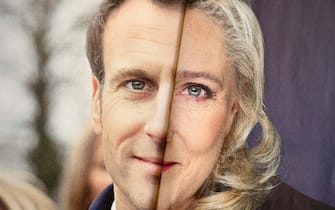 A few days after the first round, the voting intentions of the French for the second round of the French presidential elections: the April 24 it will be heads up between the incumbent president Emmanuel Macron (passed with 27.8% of the preferences) and the opponent Marine Le Pen (23.1%)

WATCH THE VIDEO: French elections, second round: how the voters will vote

For the moment it seems that even in the second round the main problem will be theabstentionwhich al first vote touched the 26.1%

Melénchon the most voted among young people

Macron and Le Pen will therefore have to try to bring towards themselves the votes of the voters who chose the other candidates in the first round. Above all, those of the leader of La France Insoumise Jean-Luc Mélenchon (in the photo, 22% in the first round), the most voted among the young French

Elections in France, Macron favored in the ballot

It will be a difficult challenge. Looking to the left, the 44% of Mélenchon voters seem intent on not voting for neither of the two finalists. So also the 38% of whom he expressed his preference for Yannick Jadot (in photo), candidate of Europe-Ecologie Les Verts (4.58% in the first round)

Presidential elections in France, how the electoral system works

It does not seem obvious to find sufficient votes even among right-wing voters. 30% of those who expressed their preference for Valérie Pécresse could abstain. 20% of the electorate could do the same Éric Zemmour (in the picture)

Elections France, who is Eric Zemmour: the anti-immigration candidate

Among the politicians candidates in the first round, to openly support the current head of the Elysée are Pécresse (in the picture), Jadotthe first citizen of Paris Anne Hidalgo and the Communist Fabien Roussel. Mélenchon is not unbalanced, but has declared that “not a single vote should be given” to Le Pen

For Macron he will vote – surprisingly – too the former president Nicolas Sarkozy (in the picture). The choice is the same as that of the socialist Lionel Jospin and by the centrists of the Udi (Democrats and Independents Union)

THE PEN – The other far-right candidates have already given their endorsement to the leader of the Rassemblement National: Zemmour and the sovereign Nicolas Dupont-Aignan (in the picture)

As for the electorate, the 23% of those who voted Mélenchon will choose Le Pen in the ballot, like the 35% of those of Pécresse and the 76% of those of Zemmour