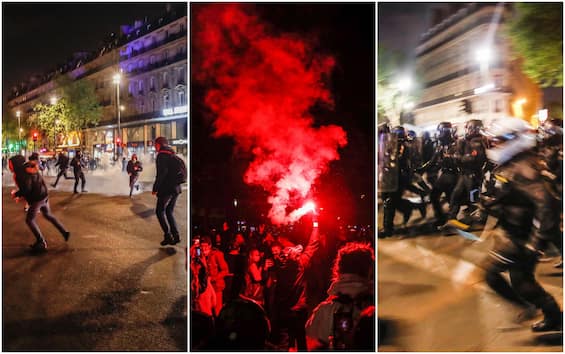 Parades and demonstrations in Paris and other French cities against the re-election of President Emmanuel Macron (THE ELECTION SPECIAL). Immediately after the announcement of the victory, in the center of Paris – in the district of Les Halles – between 250 and 300 protesters of the anti-FAS groups marched shouting “Macron go”, clashing with the police. Accidents also in Toulouse, Nantes and Rennes, peaceful processions in Caen and Strasbourg.

The parade of Paris reached the place de la République and along the way objects and stones were thrown at the police, dumpsters and parked mopeds overturned. Violence also in Rennes, in the north-west, where 250 people gathered in the center behind a banner with the words “What we will not get from the polls, we will get from the square”. Among the slogans, “Macron makes war on us with his police” and “Down with the state, the cops and the fascists”. Dumpsters set on fire with interventions on several occasions by firefighters: seven demonstrators arrested. Accidents also in the center of Nantes, during a protest march of 400-500 people, as well as in Toulouse, shouting “Neither Macron, nor Le Pen, revolution”.

Also last night the police fired on the Pont-Neuf in central Paris at a vehicle that tried to hit the officers, killing two occupants and wounding a third. According to preliminary reports, the vehicle was traveling in the wrong direction and the police were stopping it for a check when the driver aimed at the officers and they opened fire. A few hours before the incident, some 2,000 Macron supporters had celebrated his victory on the Field of Mars, located about two kilometers away, but it has not been confirmed whether the incident is connected.