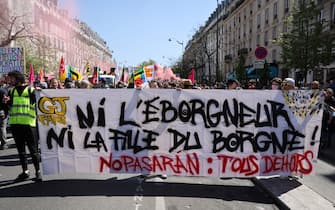 Thousands of French citizens took to the streets in Paris to protest against the candidates for the Elysée Emmanuel Macron and Marine Le Pen. The second round of elections will be held next April 24

WATCH THE VIDEO: France, how Melenchon’s voters will vote

In the first round, last April 10, the president in office Macron received the 27.85% of voter preferences, against the 23.1% of the votes obtained by Le Penleader of the far-right party Rassemblement National

Elections France, Le Pen: “I will run the country as a mother of a family”

French elections, Macron: “I promise you a new beginning”

To vote for Mélenchon, who obtained 22% of the votes, were mainly the young French people

Who is Marine Le Pen, the sovereign candidate

Dominique Sopo, president of SOS Racism, one of the organizations took to the streets, told a Reuters that “people must understand that, despite the anger towards Emmanuel Macron and his policies, there is no comparison between a liberal and conservative candidate and a candidate from the far right”

Although a strong abstention is expected on the day of the vote, the percentage of French who say they are convinced to vote for Macron has risen in recent days (in the photo, a sign that reads “Neither Macron, nor Le Pen, but above all no to Le Pen “)

According to the latest Ipsos survey conducted for France Info And Le Parisien55.5% of the French will vote for Macron, against 44.5% of those who will support Le Pen

Compared to the last survey, the gap increased by half a percentage point

As in Paris, thousands of people poured into the streets of Lyonwhere a demonstration was organized to “wipe out the far right”