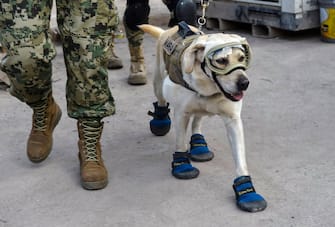 Frida, the Mexican Navy’s famous search and rescue dog, has died at the age of 13. He became famous for finding dozens of survivors after the powerful earthquake that hit Mexico City in 2017 where more than 300 people died

Umbria, the dog Leo is blind but remains a “champion” in looking for truffles

Frida, a Labrador retriever, has been credited with finding at least 43 bodies and a dozen people alive during her ‘career’ as a rescue dog

Frida had been trained by the Mexican Navy to perform search and rescue missions. She was retired from service three years ago

The best friend of the stars, the dogs of celebrities. PHOTO

The image of Frida, considered a true national hero, has appeared on several murals in Mexico City

Known for her bespoke doggy glasses and boots, Frida has become a social media star and a symbol of Mexicans’ resilience in the face of tragedy after the earthquake

Shortly after her birth in 2009, Frida began her search and rescue training with the Mexican Navy, which she finished in a record time of eight months

Frida began her relief work after the 2010 earthquake in Haiti, where she found 12 people alive in the rubble

She also assisted in relief efforts after a landslide in Ecuador in 2017, just months before the Mexico City earthquake that saw her become a national icon

Marina remembers Frida for her “independence, focus, even temper, fearlessness, curiosity” as well as her “empathy for people”