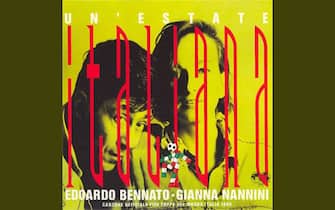 The single was undoubtedly one of the greatest hits of the 90s An Italian summer, colloquially known as Magic Nights, sung in pairs by Gianna Nannini and Edoardo Bennato. The song, the official anthem of the 1990 world championship held in Italy, was the best-selling single in our country and, historically, the last single to obtain a massive commercial response before the disappearance of this support.

The song Under this sun, written by Francesco Baccini, Paolo Belli and Enrico Prandi, and sung by Baccini himself with the Bicycle Thieves became a real summer torment of the summer of 1990, also winning the Festivalbar of that year. As for the artistic collaboration between Baccini and Belli, the latter revealed in his book that he was the only one who wanted Baccini’s participation, while the other members of the band did not agree. This clash led to the separation of Paolo Belli from the Bicycle Thieves

Italy 1982, the “catchphrases” of the year in which we won the World Cup

They killed Spider-Man sung by 883, or Max Pezzali and Mauro Repetto is the second extract from the album of the same name released in 1992. The single had a great success dragging the entire album which quickly became Platinum. Almost thirty years after the release of song we can safely say we are facing the queen of Italian catchphrases

The animal beat is a success with which Raf, Raffaele Riefoli at the registry office, wins the 1993 Festivalbar, the year in which the successful album is released Cannibals which contains ten tracks all written by the Apulian singer-songwriter together with Cheope, stage name of Alfredo Rapetti son of Giulio or Mogol

Raf, seven years after the last album returns with the single Cherie

Haddaway’s dance hit, What is love it was undoubtedly the number one of all of 1992

Shaggy’s most successful is surely Boombastic, from his third album, which in 1995 became a huge international hit. Thanks to its mix of R&B and reggae and its flirtatious attitude, the song goes to number one in America, the United Kingdom and several European countries, made even more famous by a jeans commercial Levi’s.

All That She Wants, sung by the Swedes Ace of Base, was released in November 1992. The song produced by Denniz Pop, in 1993, reached the top of many charts around the world. It stayed in the top three of Billboard’s Hot 100 for three months, but never made it to the top

“As long as the music plays”, the summer hit by Krikka Reggae

The Summer is Magic is the first single by the Italian musical group Playahitty, released in 1994. The single entered the Top 40 sales chart in Austria, France, Germany, Italy, the Netherlands, Sweden and Switzerland, becoming a summer hit that year. Even the album of the same name The Summer is Magic reached the podium in the Italian sales ranking. In the summer of 2008 a remix version was created and released

Boomdabash and Annalisa, the video and text of Tropicana

Sweet Dreams is a single by the German musical group La Bouche, released on March 12, 1994 as the first extract from the album of the same name. The song was a worldwide success

Povero Gabbiano, the lyrics of the hit song by Gianni Celeste

The Rhythm of the Night is a single sung by Corona, released in November 1993 as the first extract from the album of the same name. It is one of the most famous and representative Eurodance songs of the nineties, as well as a catchphrase that has reached the first position of the Italian singles chart. In Italy it was the best-selling single of 1994

Hey MariaAlso known as Maria Mariasung by Article 31 was released in 1994 as the third extract from the second studio album Mass of vespiri. The song allowed Article 31, or from J-Ax and DJ Jad, to win the 1995 edition of Un disco perestate

Torment and J-Ax, the new single is “Acqua su Marte”

Scatman (Ski Ba Bop Ba Dop Bop)known simply as Scatman, is a single sung by Scatman John, released on in 1994 as the first excerpt from the second studio album Scatman’s World. The song was Scatman John’s first international success between 1994 and 1995, so much so that it was one of the most played in world nightclubs; in Italy it is also known for being used as the soundtrack of the film Savages by Carlo Vanzina

What happened to the 80s and 90s TV stars? PHOTO

Boyband of the 90s, what happened to them? PHOTO

The best thing sung by Eros Ramazzotti was released in February 1996 as the first extract from the seventh studio album Where there is music. The song, written together with Claudio Guidetti for the music and Adelio Cogliati for the text, is dedicated to Michelle Hunziker (who appears in the video of the song) at the time Ramazzotti’s girlfriend

From Simon Le Bon to Billy Idol, what happened to 80s singers

Macarena is a single by the Spanish musical duo Los del Río, released in 1995 as an excerpt from their studio album A mí me gusta. The song reached global success in the summer of 1996 thanks to the remix of the Bayside Boys, which allowed it to reach the top positions of the charts in over thirty countries, including the United States, becoming over time one of the classic summer group dances from perform in discos, beaches or parties

From Annie Lennox to Sade, what happened to the singers of the 80s

Killing Me Softly, cover by the Fugees of the almost homonymous song by Roberta Flack dated 1973 earned the second position on the Billboard Hot 100 and the US airplay chart and had similar success in the United Kingdom, reaching the top position on the charts for five weeks. In Italy it reached the sixth place in the hit-parade of singles and the tenth for albums

Sex symbol of the 80s, what happened to them?

(Un, dos, tres) María or even simply “Maria” is a song written by Luis Gómez Escolar, KC Porter, Ian Blake and performed by Ricky Martin. The song was a huge hit around the world, helping to launch the Puerto Rican star’s international career

Ricky Martin, the nephew withdraws the allegations of abuse

Barbie Girl is a single from the Danish group Aqua, released on May 14, 1997 as the third from their first studio album Aquarium. It is considered one of the most successful hits in the history of music, at least of the 90s

The Gallagher brothers sign a new hit with Don’t Look Back In Anger, excerpt from the album (What’s the Story) Morning Glory? The song is the first single from the English band in which Noel replaces his brother Liam as the lead vocal. Explosive chorus and Beatlesian sound are the winning ingredients of this gem. True jewel of 90s music and beyond

Oasis, the exclusive live version of Wonderwall from Knebworth 1996 VIDEO

50 SpeciaL sung by Lùnapop was released on May 27, 1999 as the first extract from the only studio album … Squérez? The lyrics and music of the song were written by Cesare Cremonini. The singer said he wrote the song shortly before his final exams, inspired by the book Jack Frusciante left the Enrico Brizzi group

Contraband, the new song by Cesare Cremonini and Fabri Fibra