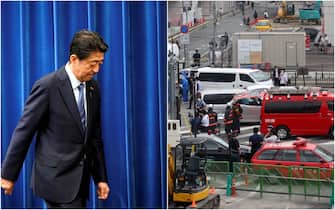 The former Japanese premier Shinzo Abe – at the helm of the government between 2006 and 2007 and between 2012 and 2020 – was shot at during an election event in Nara, central Japan. Taken to the hospital with a bleeding chest, he would show no “vital signs”. From the killings of the Kennedy brothers to the 2009 attack on Silvio Berlusconi, it is not the first time that a politician has been attacked, with serious or fatal consequences

WATCH THE VIDEO: Putin would have escaped an attack a few months ago

IN JAPAN – Remaining in Japan, in 1992 a right-wing extremist shot Kamemaru Shin, at the time vice-president of the Democratic Party, without being able to hit him. Two years later he was the premier Hosokawa Morihiro (in the photo, in 2014) to end up in the crosshairs of a firearm always held by right-wing extremists, also without being shot. The mayor of Nagasaki was not so lucky, Iccho THEto: in 2007 he was killed during an attack organized by a criminal gang

THE MURDER OF JOHN KENNEDY – The November 22, 1963, the attack that shocked America. It was around 12:30 local time when the 35th president of the United States was killed, John Fitzgerald Kennedy

Shinzo Abe, who is the former prime minister who was shot during a rally

Kennedy was in the presidential limo with his wife Jacqueline Bouvier, Texas Governor John Connally, and his wife Nellie. The presidential motorcade had just reached Dealey Plaza, northeast of the city, when he was hit in the head by a rifle shot. The wound proved fatal. He had been the one to shoot Lee Harvey Oswald (pictured), former marine, who a few days later was himself killed while in the basement of the Dallas police

THE MURDER OF ROBERT KENNEDY – Only five years later, too Robert Kennedy – John’s brother – was shot dead. He was the June 5, 1968 and the senator, engaged in the electoral campaign for the presidential elections, had called a meeting with his supporters at theHotel Ambassador in Los Angeles. He was hit on his way to the hotel kitchen. Sirhan Sirhan, a criminal of Palestinian origin, killed him

Oliver Stone: “Kennedy killed because he was a man of peace”

SILVIO BERLUSCONI AND THE STATUE OF THE MADONNINA – December 13, 2009 Silvio Berlusconi he had just finished giving a meeting in Piazza del Duomoin Milan, when it was hit in the face from a statuette of the Madonnina

The images of the Bloody Knight, as he tries to reach his car surrounded by the crowd of supporters, go around the world. The attacker is Massimo Tartaglia, judged incapable of understanding and willing by the Milanese judges and released from probation in 2016

THE MURDER OF DAVID AMESS – In the 2021 the British Conservative MP Sir David Amess was in the Belfairs Methodist Church in Leigh-on-Sea when 25-year-old Ali Harbi Ali, already known to counterterrorism, stabbed him several times, killing him

THE MURDER JO COX – The 16 June 2016 la British Labor MP Jo Cox – strongly pro-European – an electoral rally was about to begin near Leeds. A man, Thomas Mair, joins her, close to English neo-Nazi circles. THE three shots and the different ones stab wounds that hurt her leave no way out

THE ATTACK ON STEPHEN TIMMS – Before the Cox murder, the last attack on a high-profile politician to upset Elizabeth’s reign was that of the MP, also Labor, Stephen Timms. It was the May 14, 2010 and Timms was in Beckton, East London, to meet the residents face to face. Also among the participants is Roshonara Choudhry, 21, a radical Islamist. She hits him twice in the stomach with a kitchen knife. Later, she will say that she attempted to kill Timms for her support of him in the war in Iraq