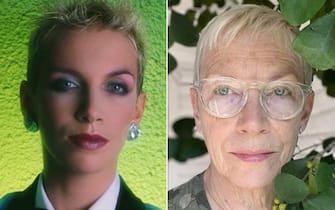 Androgynous icon of the Eighties, Annie Lennox she is still considered today one of the most important singers in the history of music. She is an artist still remembered not only for her extraordinary voice, but for her strong personality. Her latest musical album, entitled Lepidopteradates back to 2019

From Lady Gaga to Ilary Blasi, the stars before and after makeup

Kate Bush she was one of the most beloved voices in music of the eighties. She became famous with Wuthering Heightstaken from the album The Kick Inside from 1978 and inspired by the famous novel Wuthering Heights by Emili Bronte. An extraordinary piece capable of conquering the top of the charts all over the world, including Italy. After the repeated successes continued throughout the 80s, the traces of the beautiful Kate have been lost. To be noted a disc in 2011 and a series of concerts held at the Eventim Apollo in London in the same year and nothing more

The Actresses, Actors and Their Lookalikes, by Scarlett Johansson and Brad Pitt

Of the former Go-Go’s singer, Belinda Carlislewhich during the 1980s had extraordinary success with the single Mad about you there is no fresh news. In 2017 it came out Wilder Shores, an experimental album of mantra and kundalini on pop sounds, while in 2020 a documentary was presented at the Sundance film festival, which traces the history of the singer together with the Go-go’s. In a recent interview with Guardiansaid she finally got out of the drug addiction tunnel in 2005

Cyndi Lauper it is certainly part of the artists who have opened new paths and not only in music. With her colorful hair, flamboyant clothes and her liberating lyrics filled with good humor, as in the case of Girls Just Wanna Have Fun, the singer was one of the first truly modern musical icons. In recent years she has become a great champion of the rights of the LGBT community. In 2019, the United Nations decided to reward her for her efforts in “inspiring people around the world to be tolerant and true to themselves”

Of Sade who in his career that began in the 80s, has sold about eighty million records, currently have some traces lost. In recent years, best of, live albums and just a couple of unreleased albums have been released, but then that was to be expected, given the thinned out releases since the nineties. The box set was released in October 2021 This Farwhich contains the remastered versions of all six previously released unreleased albums, on 180 gram black vinyl

Bonnie Tyler is one of the unmistakable emblems of music of the 80s. Some of his songs are unforgettable, such as Total Eclipse of the Heart And It’s a Heartache. A success that has naturally faded over the decades but has not taken away the desire of the Welsh singer to continue playing. In 2013, after almost 40 years of career, she represented the UK at the Eurovision Song Contest. In March 2020, after taking part in a benefit concert in London, the album was released The best is yet to

It was 1983 when with Luftballoons the German singer Nena it has invaded the world, carrying joy and above all a powerful message of peace. For the record, the band broke up in 1987 and Nena, in addition to singing, also became a film actress. In 2003 she returned to success with the song Anyplace. In the meantime, she became a mother 5 times, a grandmother 4 times and with her husband she founded a school, free for 85 students over 10 years.

The stars meet themselves in the past, the photomontages on Instagram by Ard Gelinck. PHOTO

Singer, actress and former modelSamantha Fox gained great popularity in the 80s thanks to two hits: Touch Me (I Want Your Body) And Nothing’s Gonna Stop Me Now. In her career she has conquered the top of the charts in Great Britain, United Kingdom, Sweden and Australia. A true sex symbol, she has released seven studio albums. In 2003 he unveiled his relationship with manager Myra Stratton (who passed away in 2015). In 2020 he decided to get married with his new partner Linda Olsen

Thanks to Kids In Americaa piece composed by his father, Kim Wilde made its mark on the music scene in 1981. During the 1980s, this success was quickly followed by other hits, such as Cambodia, You Keep Me Hangin’On And You Came. In the 1990s, Kim also went through a difficult period. Her last active album was Here Come The Aliens of 2018 which took 11th place in the German rankings

One song was enough for Kim Carnes to win a place in the history of rock. In 1981, in fact, the Californian singer scored the big blow by recording a version of Bette Davis’ Eyes, song written by Jackie DeShannon in 1974, rearranged with the 80’s pop sound. The song was very popular in America and became a huge success. Now far from the general public, the singer then continued her career dedicating herself mainly to projects for cinema and television

From Madonna to Johnny Depp, 15 stars turn into “ordinary” people

In 1987 Vanessa Paradisat only 14, he achieved his first success with the song Joe taxis, a real international hit. In 1989 she made her big screen debut in Walnut blanche by Jean-Claude Brisseau, while in 1991 she was Chanel testimonial. In June 1998 she begins a relationship with the American actor Johnny Depp, with whom she has two children: Lily-Rose Melody and Jack John Christopher III. In June 2012, after 14 years, the couple officially separated. On 30 June 2018 she married director Samuel Benchetrit

From Gigi Hadid to Brad Pitt, 25 stars of today that recall those of the past

Sandra she is considered one of the greatest pop singers in Germany. With hits like (I’ll Never Be) Maria Magdalena, In The Heat Of The Night And Everlasting Love she managed to establish herself on an international scale especially in the 80s. In the 90s she abandoned her solo career to become the voice of Enigma, the New Age pop project of her ex-husband Michael Cretu. Her latest album, The Very Best Of dates back to 2016

Lady Gaga-Gucci and the others: when the actor is identified with the original

Susan Vega she was one of the most popular songwriters of the late 80’s. A musician capable of recording nine incredibly successful albums. Impossible to draw up a complete list of her successes, suffice it to name, among the most famous of her, Luka And Tom’s Diner. Married since 2006 to Paul Mills, the singer, who now practices Buddhism, she stopped making records in 2016. Her live activity however never stopped, and in 2020 she released a live LP entitled An Evening Of New York Songs And Stories

From the Simpsons to Snow White, what should cartoon characters look like if they were real?

Tracy Chapman it has become very popular since its inception, in the late 1980s, thanks to some ballads with a strong social impact. Her recording debut dates back to 1988, with the album bearing her name. Baby Can I Hold You, Talkin ’bout to Revolution And Fast Car are the single drivers. In recent years a couple of best of have been released but the singer-songwriter has always sipped her public appearances. She made an exception for the recent American elections, publicly supporting President Joe Biden

For many years she was considered by everyone as one of the most talented and fascinating stars of modern music, but then she mysteriously vanished into thin air. We are talking about Guesch Patti, one of the sexiest and most controversial characters of the eighties who sang Etienne, which still remains its true workhorse today. His latest album Derniéres Nouvelles dates back to the distant 2000, since then she has appeared in some films shot by French directors and has been a member of the jury of Dancing Showon France 2

30 stars who regretted playing a role in a movie

All Around The World, song contained in his first album Affection 1989 launched Lisa Stansfield leading the hit-parades around the world. No other of her albums have enjoyed the same success, although her records have never gone unnoticed. In recent years, Lisa has been divided between music (her latest album, the eighth in the studio, is Deeperreleased in 2018) and an acting career

Adele today, how the singer has changed: before and after the Sirt diet

Nikka Costaat the registry office Domenica Costa amazed everyone with her incredible singing voice (Out Here) On My Own at just 9 years old. Nikka’s singing career started very early. She was the child prodigy who charmed everyone with her magical voice of hers. Currently Nikka Costa continues to live on music by making covers and unreleased songs. Her life is reportedly going smoothly with her husband Justin Stanley and daughter Sugar McQueen and son Suede.

After a prolific and turbulent career that led to her being nicknamed the “Queen of Rock’N Roll”, Tina Turner announced his retirement from music in 2000, in front of a live crowd of over 75,000 at the Letzigrund stadium in Zurich, Switzerland. At the time, she said he felt he had “done enough”. His last tour before retirement, the Twenty Four Seven World Tour, spanned 95 shows and was the highest-grossing concert in 2000

20 actors side by side with their most famous characters

In 1988, at the age of 18, Tanita Tikaram became famous with the famous song Twist in my sobriety with which she managed to jump to the top of the charts by selling millions of copies and earning the title of child prodigy. Her latest works date back to 2015 with the single Food On My Table while in 2016 it came out Glass Love Train which anticipated the release of the album Closer to the people

Brothers and sisters of the stars, see who looks alike and who doesn’t

In these last years Debbie Harry and his Blondie have released two unreleased albums: Ghosts of Downloadfrom 2014, full of collaborations and with the single A Rose by Any Name And Pollinator in 2017, with, among the songs Fun And Lon Time, which marks a return to the sound of the beginnings. Debby Harry and associates recently stated that they are ready to publish new material

26 children of famous people who are the same as their parents. PHOTO