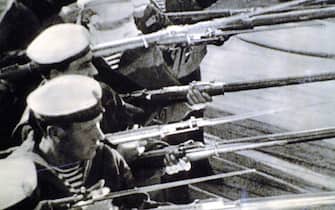 The battleship Potemkin – The film by Russian director Sergej Ėjzenštejn was at the time of its release a very modern and extremely dynamic work, which introduced some fundamental innovations in the cinema from the point of view of editing and framing. Produced as a Soviet propaganda film, Battleship Potemkin tells the story of the mutiny of the crew of the ship of the same name. The sequence of the steps of Odessa is famous

The great illusion – Presented at the Venice Film Festival, it achieved enormous success with audiences and critics, but Renoir’s film was opposed by the fascist and Nazi totalitarian regimes. Goebbels decreed the film as “cinematic enemy number one” due to the declared universal pacifism staged

Brothers, the madness of the short war of the Cesena Film Academy

Rome open city – A masterpiece of Italian Neorealism, Roberto Rossellini’s film still plays a fundamental role in contemporary cinema today. The director gives us an essential testimony of the German military occupation of Rome during the Second World War. Don Pietro, played by Aldo Fabrizi and Sora Pina, a role that consecrated Anna Magnani, are the main example of the violence and cruelty of every war

Ukraine, Universal suspends the release of its films in Russia

The great war – Mario Monicelli directs one of the masterpieces of Italian cinema. A fresco at the same time ironic and dramatic of the life of Italian soldiers in which the two main protagonists, Alberto Sordi and Vittorio Gassman represent the most varied feelings of those who fight at the front. Fear, cowardice but also courage and unwanted heroism. More generally, the folly of war is unraveled, its senselessness extendable to all conflicts. One laughs bitterly at a drama like war and at the relative stupidity of men

The bridge over the River Kwai – A film about the nonsense of war, this time directed by the British David Lean. During the Second World War, Lieutenant Colonel Nicholson, detained in a Japanese prison camp, agrees to direct his subordinates in the construction of a bridge over the River Kwai, a work in which so far the Japanese have not been successful. At the same time, one of his comrades who managed to escape alerts the Allies of the construction project and takes part in the mission to sabotage the bridge.

War in Ukraine, 9 films to understand the origins of the conflict

Horizons of glory by Stanley Kubrick instead takes place against the bloody backdrop of the First World War and shows its horror. The director focuses not on war, but on men. The protagonist is Colonel Dax, played by Kirk Douglas, who reminds us that “the noblest impulse of man is compassion for others”

The appeal of Ukrainian directors: “Help us, it’s not a film but a real tragedy”

Ivan’s childhood – Andrei Tarkovskij with this first feature film which earned him the Golden Lion at the Venice Film Festival, gives us a poignant and sincere representation of the impact that war has on children. Alternating the war events with the existential delusions of the young Ivan, the Russian director tells the parable of a child engulfed by the violence and cruelty of a historical moment that will affect all the choices of his future life

The hunter – Micheal Cimino directs Robert De Niro and Christopher Walken in a film about the Vietnam War, an absolute masterpiece of cinema of all time thanks to a story that is never predictable but developed with determination and audacity with strong and raw images to leave any spectator breathless. At the center of the film, winner of 5 Oscars, including best film and best director, is war but seen more as a dirty adventure in which the spirit with which each soldier faces and personally experiences the absurd drama of fighting is shown.

Ukraine, the cover of “Bella ciao” becomes a symbol of the country’s resistance

Apocalypse Now – Perhaps the war film most loved by critics and the public and at the same time the film that managed to be the most lucid in describing all its madness. Coppola stages the delusions and insanities that led to the Vietnam War through the enigmatic defector Colonel Walter Kurtz (Marlon Brando) and the insecure and somber Captain Benjamin Willard (Martin Sheen) who hunts him. A descent into hell or towards that “Heart of Darkness” that every human being feels within himself when he takes up a gun and begins to kill

Sophie’s Choice – Alan J. Pakula gives us a look at what the horror of war represented for those who managed to survive the Nazi death camps. Set in New York in 1947, the film revolves around Sophie Zawistowska, a Polish woman returning from Auschwitz. Gradually the viewer enters the memories of the protagonist, culminating in the “scene of choice”. There is no war, there are no killings but only the vivid echo of what Arrigo Levi called the “demolition” of the human being

War in Ukraine, Netflix suspends service in Russia in protest

Furyo – Through the persuasive notes of Ryuchi Sakamoto, Nagisa Oshima’s Furyo tackles the theme of the uselessness of war from an unusual and disarming angle. Set in 1942 in Java, the film revolves around the events of a Japanese concentration camp for Western prisoners. Colonel Lawrence (Tom Conti) and the idealist Captain Yonoi (Ryuchi Sakamoto) will confront each other, who will review his positions with the arrival of Australian officer Jack Celliers (David Bowie)

Platoon – Oliver Stone gives us one of the most beautiful war films ever made, indeed, as it is now defined, the anti-war film par excellence, capable of being intrinsically anti-system but of winning two Oscars for its brutal authenticity (best film and direction.). The film, in fact, traces the real events that the director went through in Vietnam from 1967 to 1968. The soldier Chris Taylor voluntarily leaves for Vietnam with strong ideologies, but once he reaches the territory he will have to face the cruelty of war and weapons.

Full Metal Jacket – Stanley Kubrick has recounted the war many times. With this film he tried to focus above all on the cerebral and mental aspects of the conflict. Before the war itself (addressed in the second part of the film), what is striking is the initial part of the film in which the director shows the viewer how to create a real soldier-killer and the consequent complete loss of humanity. The final film where the marines advance in a burning landscape, singing the song of Mickey Mouse is the demonstration of what is theorized

Schindler’s List – Schindler’s List is a 1993 film produced and directed by Steven Spielberg and starring Liam Neeson, Ben Kingsley and Ralph Fiennes. It is the true story of Oscar Schindler, a German industrialist who, by risking his life and career, manages to save thousands of Jews from a tragic fate. The film was shot entirely in black and white, with the exception of four scenes: the one that everyone remembers is that of the little girl in the red coat.

The thin red line by Terrence Malick is a film that is about war, but that evokes peace: it shows conflict for what it is, cruel and without that epic aura. The film’s protagonist, James Caviezel, looks more like a messenger of peace than a soldier. Through his inner monologues he pushes us to reflect on the true nature of the human being

Save Private Ryan is a film directed by Steven Spielberg starring Tom Hanks. It is from 1998. World War II: an American mother is about to receive news on the same day of the death of three of her children on different fronts of the war. Commander-in-Chief General Marshall orders that the fourth brother, Ryan, who has landed in Normandy, be tracked down and taken home. The film garnered 11 nominations and won 5 Academy Awards

Inglourious Basterds – A war film different from the others could only be made by Quentin Tarantino who shows us an unusual, ironic and tragicomic Second World War, also inserting elements of cruelty and ferocity. The company of the so-called bastards, eight Jewish soldiers belonging to different units of the American army, are assigned the task of spreading terror among the Nazi troops, with the aim of killing any German soldiers they encounter.

American Sniper – The movie that rocked Hollywood just came out, bringing to the screen the story of an American sniper engaged in Iraq. During the film he will have to fight a double battle: on the enemy field and in the family. Directed by Clint Eastwood, the film is the true story of the sniper Chris Kyle, who became the “legend” within the US military for killing hundreds (precisely 160) of people. The film is a denunciation of the war in Iraq, which has sucked up lives and oil to give life to other far more serious horrors

Dunkirk – Director Christopher Nolan directs a veritable masterpiece on the verge of a cinematic feat, that is to bring to the screen the evacuation of thousands of soldiers trapped in the French city of Dunkirk. Told from three different points of view (air, land, sea), the film, rather than on the screenplay, emotionally aims to give us back the visual and sound aspect of those who experienced that immense defeat on their own skin.

Doctor Strangelove – Another Kubrick film about the war, perhaps the most brilliant film by the New York director who centers his satire on the Cold War with all its correlates: arms race, atomic bomb nightmare, McCarthyist characters (General Ripper and the hilarious character of George C. Scott). Desecrating and decidedly irreverent in making fun of everyone, from the President of the United States, to the Texan commander of the B52s absolutely convinced to carry out his patriotic mission, to the Russian prime minister drunk on the phone