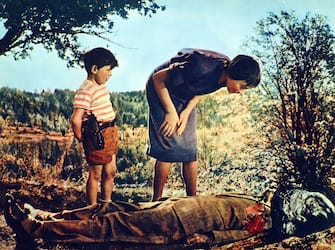 “The conspiracy of the innocents” (Alfred Hitchcock, 1955). A minor but delightful Hitchcock in this black comedy set in autumn New England enhanced by Technicolor. Grotesque and cynical with all the class available to the director; Shirley MacLaine’s first film.

“The taste of saké” (Yasujiro Ozu, 1962). The latest film by the Japanese Ozu, already attracted by the season in “Late Autumn” (1960), revolves around a widower who wants to fix up his children. Almost all set indoors, but crossed by a very autumnal mood, halfway between serenity and resignation.

“Halloween” (John Carpenter, 1978). One of the most famous horror films of all time, the progenitor of a long generation of slasher movie: written in ten days, shot in three weeks, with Carpenter also composing the music. A long nightmare in which Carpenter plays with the spectator and makes fun of him.

The most horror costumes for Halloween

“Autumn Symphony” (Ingmar Bergman, 1978). After sacrificing her family for her career, a pianist returns home and faces her daughter. A bit of a manner, a “Bergman-style” film made by Bergman himself. The only film in which Ingrid worked with Ingmar.

“When Harry Met Sally” (Rob Reiner, 1989). Unforgettable comedy, which has become proverbial due to the dynamics between young men and young women and the dilemma about friendship that can turn into love. Everything perfect, from Billy Crystal and Meg Ryan to jazz music and of course autumn photography.

“The fleeting moment” (Peter Weir, 1989). Another great classic of American cinema of the Eighties, which became a model for dozens of student-themed films, with a Robin Williams star performer and a nostalgic and almost mystical tone towards school and the age in which one becomes an adult.

The most beautiful roles of Robin Williams

“Scent of a Woman – Scent of a Woman” (Martin Brest, 1992). Hollywood remake of Dino Risi’s “Profumo di donna” with Vittorio Gassman, revolves around an excellent Al Pacino (awarded with an Oscar) who dances a memorable tango with an unknown woman. A little heavy, but very well performed.

The 15 best characters of Al Pacino

“Nightmare Before Christmas” (Henry Selick, 1993). It is written Selick, it is read by Tim Burton, author and producer of the project. Magnificent film, also original in its stop-motion production, which has become a classic of the period between Halloween and Christmas.

The best films of Tim Burton

“Casper” (Brad Silberling, 1995). Beautiful comic-sentimental autumn fairy tale with all the right ingredients: a gloomy castle, a widowed father with a daughter, a ghost and three rowdy uncles who bring havoc and joy. But also serious themes: the afterlife, resurrection, death. And there’s also Clint Eastwood …

“The Incredible Flight” (Carroll Ballard, 1996). An incredible story that really happened: a 14-year-old girl, aboard a deltamotor, takes the lead of a flock of geese that are migrating to North Carolina. Among the autumn films by definition.

“Will Hunting – Rebel Genius” (Gus van Sant, 1998). Nine years after “The Fleeing Moment”, Robin Williams still plays the man who unlocks the minds and hearts of prodigious but problematic young students – and wins the Oscar.

The best films of Matt Damon

“There is post @ for you” (Nora Ephron, 1998). With the little snail in place of the “a”, the remake of Ernst Lubitsch’s “Write me mail”, one of the greatest romantic comedies of all time, in the time of the Internet. The proven pair Meg Ryan-Tom Hanks is a guarantee, as is the autumn New York that lights up the atmosphere.

“Rushmore” (Wes Anderson, 1998). A 15-year-old prodigy student at the school in Rushmore, Texas, Max falls in love with a young teacher and complicates his life. Second film by the still unknown Wes Anderson, all his subsequent cinema is found in miniature.

The best films of Wes Anderson

“Autumn’s Tale” (Eric Rohmer, 1998). Feminine ballet, delicate and graceful, around two women who want to find a husband for a third, a 45-year-old widow and winemaker. Summa of Rohmer’s “invisible” cinema.

“Autumn in New York” (Joan Chen, 2000). Autumn drama of yesteryear with Richard Gere and Winona Ryder who love each other – but only until Christmas – opposing the frenzy of contemporary Manhattan.

The best films of Richard Gere

“Far from Heaven” (Todd Haynes, 2002). Fifties melodrama modeled in the image and likeness of Douglas Sirk’s great films, with Julianne Moore “desperate housewife” and attracted to her black gardener, while her husband no longer represses his homosexuality.

“The Village” (M. Night Shyamalan, 2004). In tone and subject matter, Shyamalan is one of the most autumnal directors of recent decades: this costumed thriller perhaps plays a little too much with the expected final twist, but it captures and becomes suggestive as the minutes go by.

The most beautiful images of Joaquin Phoenix

“Fantastic Mr. Fox” (Wes Anderson, 2009). The genius of Anderson, inspired by the book by Roald Dahl (1970) borders on animation, but not only: ironic dialogues, bright and complex characters, an explosion of colors all around the shade of brown.