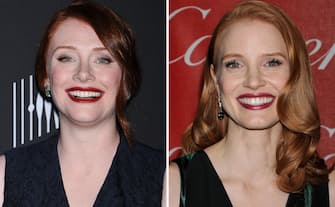 The similarity between Jessica Chastain (right) And Bryce Dallas Howard (Jurassic World) is undeniable. During an episode of Jimmy Fallon’s “Tonight Show”, Chastain had the opportunity to tell about the first time she was mistaken for her colleague: a group of guys congratulated her on her performance in “The Village” by M. Night Shyamalan, where Bryce Dallas Howard appeared instead

From Madonna to Mickey Rourke, what would stars be like without “retouching”. PHOTO

Katy Perry And Zooey Deschanel they look like twins separated at birth. And they both know about it. Like, for example Katy, who pretended to be Zooey when she was not yet famous to be able to enter the clubs

The nickname of Severus Snape of TV and the world of music is not causal for the Afterhours leader, Manuel Agnelli. Indeed his resemblance to the actor Alan Rickman as the half-blood prince of the Harry Potter saga is truly incredible

Harry Potter, here is the “real” appearance of the characters according to the descriptions of the books. PHOTO

Scottish actor Gerard Butler and the very Neapolitan Alessandro Siani they are two extremely different actors, yet many have compared them for their resemblance, at least in terms of features

Actresses, actors and their doubles, from Scarlett Johansson to Brad Pitt

Fine features, high cheekbones, a magnetic gaze and an innate elegance: Bella hadid and the young Carla Bruni they are really two drops of water

It’s all true, 20 movie scenes in which what you see is real

The actress Isla Fisher she has spoken several times about how people mistake her for the actress Amy Adams (left). During an appearance on the talk show hosted by Jimmy Kimmel, she in fact told of some embarrassing situations caused by the similarity existing with her colleague. For example, the star of the comedy “I Love Shopping” recalled how Lady Gaga went to congratulate her on her performance in the film “American Hustle” during an Oscar party, and did not have the courage to reveal the mistake

Kristen Stewart And Riley Keough they look a lot alike. Above all they have very similar colors, just look at the eyes and hair.

The 42 scariest movies ever made: a scientific study confirms it

Jeffrey Dean Morgan And Javier Bardem: they are really two drops of water.

A look behind the scenes, 50 photos from the sets of the most beautiful films

Margot Robbie she said she was stopped by a fan who wanted to congratulate her for her performance in Sex Education: “To which, a little embarrassed, I replied: ‘I’m sorry, but it’s not me'”. Looking better at the protagonist of hers, Emma Mackeythe resemblance is truly remarkable

Lady Gaga-Gucci and the others: when the actor is identical to the original

Canadian singer and actress Melissa Molinaro she has become famous for her truly remarkable resemblance, both in face and shapely physique with Kim Kardashian

From Audrey Hepburn to Marilyn Monroe, yesterday’s stars according to today’s standards. PHOTO

Behind the scenes, 30 scenes we wouldn’t have seen without special effects

Zoe Saldana he said even his parents were convinced that their daughter starred in Westworld. “After a while I couldn’t take it anymore and I had to tell my mom that that’s not me, but Thandie Newton”

We hated each other so much, 20 actors who can’t stand each other on set and in real life. PHOTO

Among the actresses who look alike also stand out Kate Mara And Anna Kendrick. The two have often been confused on various occasions

Evan Rachel Wood made famous thanks to the TV series Westworld and Rachel Brosnahanprotagonist in The Marvelous Mrs. Maisel are practically identical or in any case very similar

Stars meet themselves in the past, Ard Gelinck’s Instagram montages. PHOTO

They are the protagonists of the two most loved and well-known film sagas in the world, namely those of Harry Potter and The Lord of the Rings with protagonists on one side Daniel Radcliffe and on the other Elijah Wood. Yet some careless fans still confuse them. Radcliffe himself told us about it who, stopped for an autograph by one of his admirers, realized instead that he had been mistaken for the actor from The Lord of the Rings. He took a pen and paper and wrote: “I’m not Elijah Wood. Kisses”

From Gigi Hadid to Brad Pitt, 25 stars of today who remember those of the past

The actresses are very similar Scarlett Johansson And Amber Heard, at least in this photo

Johnny Depp and Amber Heard, from the love story to the trial: what happened. PHOTO

The British actor Tom Hardy and his fellow American Logan Marshall-Green they really look alike, to the point that it is legitimate to wonder if they weren’t separated at birth

50 of the most paused movie scenes in American cinema

Mila Kunis And Sarah Hyland they appear to be related, thanks largely to the deep green eyes and long brown hair they share

From Aquaman to Mr.Bean, 40 films revisited by the artist Pixelfaker

The actress Keira Knightley she said she was mistaken by fans more than once for Natalie Portman, calmly posed with them for a selfie in the role of Natalie and also signed the autographs

The juvenile resemblance between the pop star was historic, at least in Italy Madonna it’s ours Paula Barale

Just the word, the most famous phrases taken from the movies

From her hair color to her eyes, it’s almost hard to miss the similarities between the actress Eva Mendes and the model Ashley Graham

No Makeup: from Chiara Ferragni to Elodie, this is how 35 natural stars look like. PHOTO

50 of the most paused movie scenes in American cinema

2022, red carpet horrors: the worst dressed stars of the year

Josh Holloway who became famous for being one of the protagonists of Lost, looks a lot like the actor Nikolai Coster-Waldau seen in Game of Thrones

Behind the scenes, 30 scenes we wouldn’t have seen without special effects

Lucy Hale And Selena Gomez they are not only linked by having both made their debut in the world of entertainment both as actresses and as singers, but also by a very great physical resemblance. The two girls are in fact very similar: both brunettes, with fairly thin lips and pronounced cheekbones

It’s all true, 20 movie scenes in which what you see is real