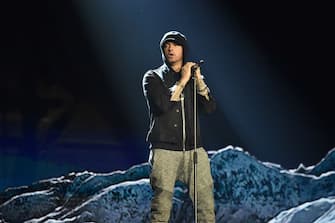 Eminem is the rapper who joined the Rock and Roll Hall of Fame this year. He was placed in the “Performers” category. This year he is the only rapper, as well as the only one to have started making music in the 90s and the only one to enter immediately the first year in which he was eligible.

WATCH THE VIDEO Rock and Roll Hall of Fame: the most famous musicians

The legendary Dolly Parton, American singer-songwriter, musician and actress considered a living legend of country music, enters the Rock and Roll Hall of Fame in 2022. Dolly Parton will enter despite the “renunciation” she made last March, when she said she did not he deserved to enter. But the Hall of Fame explained that she was now too late to retire

Duran Duran, a British new wave and synth pop musical group born in 1978 and still in business, are one of the bands welcomed this year into the Rock and Roll Hall of Fame

VIDEO Rock and Roll Hall of Fame, with McCartney and Swif

35 years since the first entries into the Rock and Roll Hall of Fame: here are the most famous. PHOTO

Pat Benatar, born Patricia Mae Andrzejewski, is the American singer-songwriter famous, among other things, for being the second to appear on MTV, with the video of the song You Better Run, the second broadcast in the history of the broadcaster, immediately after. Video Killed the Radio Star by the Buggles. She this year she joins the Rock and Roll Hall of Fame

Rock and Roll Hall of Fame, here are the nominations for 2020. PHOTOS

The Eurythmics, the British synth pop duo formed by Annie Lennox on vocals and David A. Stewart on guitar (and all other instruments, too), enter the Rock and Roll Hall of Fame in the “Performers” category

All the looks of Annie Lennox, refined pop icon

Carly Simon, the American singer-songwriter best known for her songs You’re So Vain from 1972 and Coming around again from 1986, enters the Rock and Roll Hall of Fame this year.

Check out all the music news

Judas Priest will enter the Rock And Roll Hall Of Fame, although they did not fall within the fan vote. The legendary British group will receive the Musical Excellence Award. This is the recognition in the category that rewards artists whose music has had a strong impact for influence and originality

Harry Belafonte will go to the Early Influence Award. American musician, actor and civil rights activist, he is a true living myth. He was born on March 1, 1927. One of his most famous songs is Banana Boat Song

Elizabeth Cotten (known as Libba) will also go to the Early Influence Award. She passed away in 1987, she was one of the most important musicians of the American blues and folk genre

From Jay-Z to the Foo Fighters: the nominations for the Rock & Roll Hall of Fame 2021

Jimmy Jam & Terry Lewis, a duo of American record producers and musicians active since the 1980s and now true myths of the seven notes, will receive the Inductee – Musical Excellence award

Allen Grubman, one of the leading entertainment attorneys, and Jimmy Iovine (pictured), US record producer and entrepreneur, chairman of the board of directors of Interscope-Geffen-A & M, will also be honored and enter the Rock and Roll Hall of Fame.

Sylvia Robinson, American singer and producer who passed away in September 2011, will be awarded the Inductee – Musical Excellence award

With the exception of the Eurythmics, all other award-winning artists in 2022 are still in business. Also it could be that Annie Lennox and Dave Stewart surprise us with a nice reunion for the occasion. After all, in 2019 this mythical duo got together for a charity concert organized in New York. Pictured Annie Lennox and Dave Stewart at The Rainforest Fund 30th Anniversary Benefit Concert Presents ‘We’ll Be Together Again’