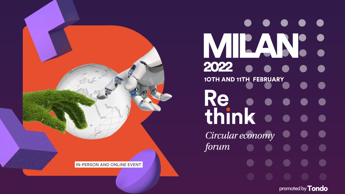 Two days dedicated to Agri-food, Textile and Fashion, Cities, Materials and Digital Technologies with a single common focus, the Circular Economy. These are the themes at the center of the 5th edition of Re-think – Circular Economy Forumevent promoted and organized by Tondo, an international organization operating in the Circular Economy sector, held on 10 and 11 February at the Milan Monza Brianza Lodi and Triennale Milano Chamber of Commerce in hybrid mode between physical and online event.


More than 60 companies, startups and institutions involved who presented and told their paths and projects in the world of Circular Economy and sustainability. Not only testimonies of Italian circular products and services, but also contributions from avant-garde European actors who enriched the forum. The partners of the event include the Milan Monza Brianza Lodi Chamber of Commerce, Esselunga, Atm, A2A, UniCredit, the Consulate General of the Netherlands in Milan, Teads Italia, Epm, Fondazione Pistoletto – Cittadellarte Fashion Best, Cueim, representing Interreg Med Green Growth Community with the Pefmed plus and Aristoil plus projects and Almed – High School in Media Communication and Entertainment of the Catholic University.

“We are very satisfied with the success achieved by Re-Think, both in terms of participating companies and the public, a forum that UniCredit has decided to sponsor with great enthusiasm because it is fully consistent with UniCredit Unlocked’s sustainable development strategy, the Strategic Plan 2022-2024 of the bank – he declared Marco Bortoletti, UniCredit Lombardy Regional Manager – Also through these events, we want to raise the attention towards the processes of transformation of economic activities from an ESG perspective of greater environmental and ecological sustainability, which represent growth drivers for both UniCredit and the Italian system “.

The first day opened with greetings from the institutions and introducing the current state of implementation of the Circular Economy at national and European level and on future prospects. Subsequently we got to the heart of the question, dealing with the issue ofAgri-food, a sector of strategic importance for the Italian economy. Many ideas emerged, such as the need for a change in the production, transformation, distribution and consumption of food, which must be the result of joint governance at local, national and international level, through the adoption of measures aimed at having an impact on the resilience and sustainability of agri-food systems.

Another fundamental economic sector for Italy, explored during the first day of the event was the Textile and Fashion, which is increasingly undergoing profound cultural and strategic transformations. These changes, in addition to being necessary to mitigate the environmental impact of the sector, can allow fashion brands to understand how their supply chain operates and then transform the elements of uniqueness and value into a narrative that enhances the brand, its people. and the territories in which it operates.

The second day, entirely in English, opened with institutional greetings to then give space to City, microcosms where 85% of GDP is produced and where 75% of resources are consumed. However, their role is changing, having to face numerous challenges such as achieving zero emissions, developing and increasing resilience to cope with external shocks, such as Covid-19. Cities, which increasingly aim to be circular and smart, must be based on materials, technologies and flows that optimize and connect infrastructures with the human and social capital of those who live there.

“We were very happy to be partners of this edition of Re-Think and to have participated, discussing a central theme for our government and for Europe – commented the Consul General of the Netherlands in Milan Mascha Baak – The Netherlands wants to be a fully circular economy in 2050. To achieve such an ambitious goal, collaboration between public and private, research and civil society, even beyond their own national borders, is essential “.

Not only. During a round table that saw the theme of circular innovation and startups as the protagonist, the birth of a new one was announced Startup Studio: Tondo Venture. Work then continued on the theme of circular materials, extremely useful for reducing the problems associated with supply chain shocks and for enabling key and low-emission technologies such as digital, renewable energy, electric mobility and much more. Another important theme covered in this session was design, with an emphasis on ‘Distributed Design‘which guarantees local production with local raw materials and a longer product lifespan, making products universally manufacturable and accessible to designers around the world. The day ended talking about Digital Technologies and deepening the most promising trends of the moment, with a particular focus on platforms, waste management and blockchain.

“This edition of Re-think was also a great success, for the interventions of depth, breadth of the topics covered, and for the actors involved – he declared Francesco Castellano, founder of Tondo and Tondo lab – It was certainly one of the biggest events we have achieved in every aspect; we had never before reached such numbers in terms of audience and participation. It is evident that everyone’s interest is always shifting towards these areas. We firmly believe that this is indeed the time to act, to transform words into projects, and to implement what we call Circular Disruption. “The Re-think event was sponsored by: European Commission, Ministry of Ecological Transition, Region Lombardia, Municipality of Milan, Asvis, Aisom, University of Gastronomic Sciences, Liuc – Cattaneo University and University of Milan-Bicocca. Media partners of the event are Prometeo of the Adnkronos Group, Renewable Matter, Greenplanner, SmartGreen Post, SmartRicicla and Not Only Environment.