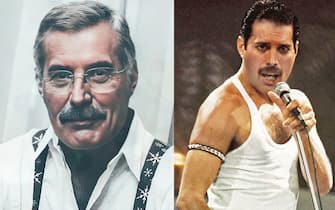 “I wish he hadn’t had that disease.” The charismatic frontman of the Queen Freddie Mercury he passed away in 1991 at the age of 45 from bronchopneumonia aggravated by AIDS. In the latest statement released before he died, the king of rock confirmed the conjectures in the press about the infection: “The time has come for my friends and fans around the world to know the truth, and I hope everyone will join me. and to my doctors in the fight against this terrible disease ”

Queen, Brian May is moved in the virtual duet with Freddie Mercury

© Photo taken from the Instagram profile of Alper Yesiltas and IPA

“I wish he hadn’t been impressed by the weariness of his role.” The actor Heath Ledgerfound dead in 2008 in a New York apartment aged 28 from an overdose of drugs and sleeping pills, won a posthumous Academy Award for Best Supporting Actor for the role of the Joker in The dark Knightfilm from the trilogy of Batman directed by Christopher Nolan. It seems that the identification with the antagonist of the man-bat has eroded the serenity of Ledger, swallowed by the character, tormented by constant thoughts and suffering from sleep disorders

“I wish he hadn’t looked elsewhere for the inspiration he needed.” The lifeless body of Janis Joplin was found in room 105 of the Landmark Motor Hotel in Los Angeles in 1970, when the queen of the blues was only 27 years old. An overdose of heroin crushed the woman who in adolescence had been bullied for acne and overweight, in her youth she sought nourishment for her hunger for love and in the ranks of the hippy movement she had a hoarse voice and intense

Janis Joplin, the official video of “Me and Bobby McGee” arrives

“I wish he hadn’t looked elsewhere for the inspiration he needed.” Yesiltas also addressed the same dedication to Jimi Hendrix, a member with Janis Joplin and other music greats (including Jim Morrison) of Club 27, the group of artists who disappeared at the age of 27. In 1970, the legendary guitarist choked to death from a retching caused by taking too many tranquilizers. “I wanted to see again in front of me some people I missed and so the project was born” explained Yesiltas

Nuclear Tactical Penguins, out of the song “John Wannabe” that quotes Jimi Hendrix

“I wish he had chosen to stay.” In the potting soil of a planter in Seattle’s villa Kurt Cobainthe electrician who discovered the body of the leader of the Nirvana he also found a farewell letter. “I am too much of a fickle, moody child! I no longer have any emotion, and remember, it is better to burn quickly than to go out slowly ”. At just 27, body overflowing with heroin and head pierced by a rifle shot, Cobain committed suicide and left his wife Courtney Love and daughter Frances.

“I wish he hadn’t suffered from vitiligo.” Michael Jackson he was born black and died white. Suffering from autoimmune skin disease, the king of pop attempted to fight skin lesions with lightening treatments and cover scars with hats, masks and gloves. “My favorite moment is when I think the image in front of me looks really realistic, just as if it had been taken by a photographer” explained Yesiltas

“I wish he hadn’t been in New York that day.” On the evening of December 8, 1980, the fanatic Marc David Chapman murdered John Lennon with four shots in the back in front of the Dakota Building near Central Park, where the Beatles member lived with his wife Yoko Ono and son. Shortly before the murder, Chapman had Lennon signed the cover of the artist’s latest album, Double Fantasy, and immediately afterwards he had not run away, but had actually started reading the The young Holden

“I wish he hadn’t taken that painkiller that day.” The actor and martial arts master Bruce Leeoriginally from Hong Kong, died in his sleep at 32 in the apartment of Taiwanese actress Betty Ting Pei due to an allergic reaction to a drug

Bruce Lee, the best fight scenes from his films

“I wish he had decided to live a life in which to pay more attention to the health of his heart.” Ginger Alden, partner of Elvis Presley, found the king of rock on the bathroom floor of Graceland, the Memphis mansion. The official declared cause for his death was cardiac arrhythmia, but in the last years of his life the legendary forked artist had also suffered from depression and abused drugs.

“I wish he hadn’t been involved in that event that would have forced him to face the mafia.” Tupac Shakur, known as 2Pac, revolutionized hip-hop music with social criticism. One night in 1996 the rapper was shot dead in a BMW by gunshots fired from a Cadillac. A few months later, rival Notorious BIG was also murdered

26 years ago Tupac Shakur, the man who revolutionized hip-hop, died

Even the talented queen of soul Amy Winehouse joined Club 27 along with the other music legends who died prematurely. Winner of five Grammy Awards, the singer-songwriter suffered from eating disorders and alcohol and drug problems. In 2011, it was precisely the intake of an excessive dose of alcohol that caused his death in the London apartment in Camden

Amy Winehouse, the story of the singer-songwriter who died 11 years ago. THE PHOTOS

A car accident under the Ponte de l’Alma in Paris ended the life of the Princess of Wales Diana Spencer, on the run with her boyfriend Dodi Al Fayed from the paparazzi stationed outside the Ritz Hotel. The news of Lady D.’s disappearance broke the hearts of the British people

Lady Diana Spencer, the photostory of the Princess of Wales

© Photo taken from the Instagram profile of Alper Yesiltas and IPA

In 2013 another car accident killed him Paul Walkerthe star of Fast and Furious traveling in a Porsche near Santa Clarita, California. The collision between a tree and a lamppost caused a strong explosion and a fire. Daughter Meadow then filed and won a lawsuit against the automaker, which eventually admitted the vehicle’s stability issues.

Hollywood Walk of Fame, all artists who will receive a star

The story of Selena Quintanilla, the “Latin Madonna”, looks like a noir. At the height of her success, the queen of Latin American music made a great friendship with her big fan Yolanda Saldívar. Her friend, in charge of managing Selena’s clothing stores and fan club, however, cheated the singer. Cornered, in 1995 Yolanda murdered Selena, who was only 25, with gunshots