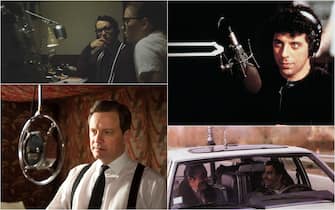 There World Radio Day it is an anniversary established by the United Nations and is celebrated every year on 13 February. Even the cinema has often been inspired by events with radio references. From Good Morning Vietnam to Radio Days, from Radio America to Tandem, here are the most famous films

I LOVE RADIO ROCK (2009) – The Richard Harris movie (original title The Boat That Rocked) tells about the phenomenon of English pirate radios in the 1960s. Outstanding soundtrack and an ensemble cast that features Philip Seymour Hoffman, Kenneth Branagh, Rhys Ifans and Bill Nighy among others. The film is based in particular on the true story of Radio Caroline, a broadcaster founded on a ship that broadcast from international waters

The best movies about music

GOOD MORNING, VIETNAM (1987) – Robin Williams is the protagonist of Barry Levinson’s film which tells the true story of Adrian Cronauer, an airman and DJ who became the host of the local US Army radio in Saigon during the war in Vietnam. Irreverent and volcanic, he upsets the broadcaster’s schedule and only broadcasts rock music, becoming very popular among soldiers and badly tolerated by his superiors.

RADIO AMERICA (2006) – The latest film directed by Robert Altman (original title A Prairie Home Companion) is the story of a small Minnesota radio station that has been broadcasting the same music and commercials program since the 1970s. The protagonists, loved by the public, are now getting old. When the radio is absorbed by a large company, the program moves towards closure. The ensemble cast is sublime, from Woody Harrelson to Meryl Streep, from Tommy Lee Jones to Lily Tomlin

Yesterday and today, how Meryl Streep has changed over the years

RADIO DAYS (1987) – Pearl by Woody Allen who uses the common thread of the radio to tell the life of American families in the golden age of radio, between the 30s and 40s. From quizzes to shows, from reading novels over the air to Orson Welles’ famous broadcast on the alien invasion, it’s a great tribute to the radio through the eyes of protagonist Joe, a sort of alter ego of the director

Woody Allen turns 86: all his most famous films in 26 photos

THE VAST OF NIGHT (2019) – Andrew Patterson’s debut feature is an original homage to vintage science fiction that mixes radio, UFO and cinema. In the 1950s, a strange signal picked up by a switchboard operator is broadcast by a friend of hers who works on the local radio in the hope that someone can help them understand.

RADIOFRECCIA (1998) – The debut behind the camera of Ligabue, who definitively launched the career of Stefano Accorsi with this film, intertwines the phenomenon of free radios in Italy in the mid-1970s with the story of a group of friends in a small Emilian village. The events of Radio Raptus are the story of an era

RADIOSTARS (2012) – French comedy by Romain Levy, tells the story of Ben, who returns to Paris from the USA and is in crisis both professionally and emotionally. Meet Alex, presenter of Blast FM’s morning radio show, the Breakfast Club. Ben is hired as a screenwriter and has to help the staff save the radio from slumping ratings

UP THE VOLUME (1990) – Allan Moyle’s film follows Mark (played by Christian Slater), a high school student from Arizona who launches a pirate radio that broadcasts from the basement of his parents’ home. More and more young people tune in to his program even if no one knows the true identity of “Hard Harry” or “Happy Harry Hard-on”, as Mark has renamed himself.

TALK RADIO (1988) – Oliver Stone follows the story of Barry Champlain, a young man who starts working in a radio station in Dallas, enjoying great success with his program Voices in the night. Dialogue with listeners, give them advice and openly sided with minorities, from homosexuals to African Americans, attracting threats from neo-Nazi extremists

TALK TO ME (2007) – Director Kasi Lemmons tells the story of Petey Greene (played by Don Cheadle), a former inmate who becomes a radio broadcaster after being released. We are in the 60s and the protagonist gets great success especially among the Afro-American community which sees him as a reference, in a period in which we began to talk about civil rights

THRILL IN THE NIGHT (1971) – In his directorial debut, Clint Eastwood also stars in the film: he plays Dave Garver, a KRML disc jockey who broadcasts every night from a California studio. The meeting with one of his listener will lead to the beginning of a very obsessive relationship on the part of the girl. One of the keys to the film is the repeated request to play the jazz song on the radio Misty (in fact the title of the original film is Play Misty for Me)

THE AGRONOMIST (2003) – Documentary by Jonathan Demme, traces the life of the journalist Jean Dominique who launched Radio Haiti-Inter, the first independent station on the island and a means to carry on the battles for civil rights under repressive regimes. Using the radio as a space of freedom cost him his life

TANDEM (1987) – Film by Patrice Leconte, is the story of Michel Mortez, creator and host of a very popular traveling radio program, La langue au chat (The cat’s tongue), and his handyman, the sound engineer Rivetot. Things will change when the radio station warns them that the program will be closed shortly

THE TALENT OF CALABRONE (2020) – Giacomo Cimini’s film is a thriller that revolves around a man (Sergio Castellitto) who calls a radio threatening to blow himself up on a car bomb in the city. The whole plot takes place in a long question and answer between the man and the radio broadcast

THE KING’S SPEECH (2010) – Director Tom Hooper is inspired by a true story that in its own way has the radio as a starting and ending point. King George VI (Colin Firth) ascends the throne but suffers from a form of stuttering and speech therapist Lionel Logue (Geoffrey Rush) is called to help him overcome it. With unconventional methods, the two establish a relationship of friendship and eventually the sovereign will be able to deliver a perfect radio speech to the nation, at a time when radio was the only means by which a king could communicate with his subjects.