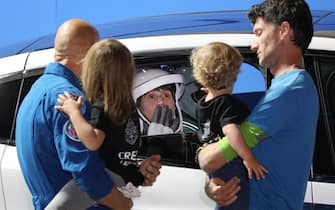 She arrived aboard the Samantha Cristoforetti International Space Station: the Italian astronaut reached the ISS thanks to the capsule Crew Dragon Freedomalong with NASA colleagues Kjell Lindgren, Bob Hines, and Jessica Watkins

WATCH THE VIDEO: The welcome of the Iss to Samantha Cristoforetti

Yesterday the photo of Samantha Cristoforetti greeting her children before heading to the launch pad. It is his second space missionafter the six months in orbit between 2014 and 2015

Crew-4 with Samantha Cristoforetti arrived aboard the ISS

The launch is happened in the night with the Falcon 9: the Crew-4 embarked on the Crew Dragon Freedom is the fourth mission with astronauts aboard the new shuttles developed by Space X on behalf of NASA

Samantha Cristoforetti, who is the Italian astronaut who conquered Space

Travel lasted about 16 hours. To welcome the crew of the Crew-4 were the seven cosmonauts already present on the ISS: three Americans, three Russians and the German Matthias Maurer, from ESA

Cristoforetti took on the role of leader of the American orbital segment, that is the set of US, European and Canadian modules and components of the ISS. The astronaut will work on the Minerva mission, which he foresees dozens of scientific experiments

Among these is Prometeo, coordinated by the Italian Institute of Technology to limit effects of oxidative stress in the human bodyOvospace conceived by researchers from Sapienza University to study the impact of microgravity on the female reproductive system and Evoo in Space, developed by Crea (Council for research in agriculture and the analysis of the agricultural economy) to understand the effects of the space environment on extra virgin olive oil