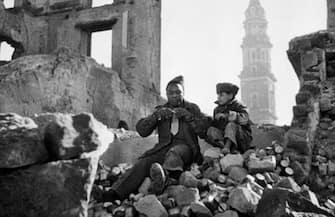 The neorealist masterpiece in three parts Paisa, directed by Roberto Rossellini in 1946, dedicates one of his episodes, entitled precisely Naples, in the Neapolitan capital, and tells of the encounter between the street urchin Pasquale and the African-American military policeman Joe

WATCH THE VIDEO: The trailer for Sorrentino’s It was the hand of God

Neapolitan Carousel by Ettore Giannini, with Sophia Loren and Paolo Stoppa, is undoubtedly one of the best films set in Naples: in it the Neapolitan storyteller Salvatore Esposito recalls the key moments of local history and culture in a series of episodes

Sophia Loren: 20 films to see with the actress

Misery and nobility by Mario Mattoli, from 1954, based on the homonymous theatrical comedy by Eduardo Scarpetta, is one of the most successful films by Antonio De Curtis, better known as Totò. This is Felice Sciosciammocca, a womanizer who shares misery with his two families. The scene of the “spaghetti with hands” is legendary

Also in 1954 Vittorio De Sica directs The gold of Naples, a film divided into six episodes set in the Neapolitan capital, in which stars such as Sophia Loren, Silvana Mangano, Eduardo De Filippo and Totò appear

In Ferdinand I, King of Naples by Gianni Franciolini, from 1959, King Ferdinando is grappling with the popular discontent fomented by Pulcinella. In the cast Peppino, Eduardo and Titina De Filippo, Renato Rascel, Aldo Fabrizi, Marcello Mastroianni and Nino Taranto

Naples in the cinema: the best films

There is no hope for Naples in the 1963 film of denunciation directed by Francesco Rosi Hands on the city, in which the dark sides of the economic boom of the 1960s are highlighted

Naples is also the background to Italian wedding, a 1964 film by Vittorio De Sica, in which Marcello Mastroianni and Sophia Loren play the rich womanizer Domenico Soriano and the former prostitute Filumena Marturano, with whom the former has a twenty-year relationship

Mastroianni and the other Italians who landed in Hollywood

In Operation San Gennaro by Dino Risi, from 1966, three American criminals go to Naples to steal the treasure of San Gennaro. To do this they turn to an old glory of local crime, Don Vincenzo (Totò), who directs them to his protégé Dudù (Nino Manfredi)

Nino Manfredi: one of the symbolic actors of Italian cinema was born 100 years ago

In Neapolitan yellow in 1979 by Sergio Corbucci, Marcello Mastroianni is a music teacher afflicted with a limp who, due to unfortunate circumstances, finds himself involved in a series of crimes. With him in the cast Renato Pozzetto, Ornella Muti, Michel Piccoli and Peppino De Filippo

Thus spoke Bellavista, directed by Luciano De Crescenzo and based on his novel of the same name, it tells of retired philosophy professor Gennaro Bellavista, a true Neapolitan, struggling with a new Milanese neighbor and some family problems

I thought it was love … instead it was a gig, a film by Massimo Troisi from 1991, tells the sentimental vicissitudes of two Neapolitan boyfriends, Cecilia (Francesca Neri) and Tommaso (played by Troisi himself)

The funniest phrases from Troisi’s films

Troubling love, a 1995 film directed by Mario Martone and based on the novel of the same name by Elena Ferrante, tells of a woman, Delia (Anna Bonaiuto), who returns to Naples after several years of being away and begins to investigate the death of her mother

The brilliant friend 3: shooting of the new season of the series based on the novel by Elena Ferrante is underway

In Neapolitan spell, a 2002 film signed by Paolo Genovese and Luca Miniero, Assuntina, although born in a 100% Neapolitan family, grows up speaking in a strict Milanese dialect and rejecting Neapolitan traditions

Luca Miniero and the previews on Cops 2: VIDEO

In Gomorrah, 2008 film adaptation of Roberto Saviano’s bestseller, Matteo Garrone sheds light on the “dark side” of Naples

In Fortapàsc by Marco Risi, from 2009, the late Libero De Rienzo plays Giancarlo Siani, a young journalist who finds himself investigating the Camorra

Libero De Rienzo: the memory of friends and actors on social media

With his “music documentary” Passion, the Italian-American actor and director John Turturro pays tribute to the city of Naples

In Reality by Matteo Garrone, from 2012, a Neapolitan fishmonger dreams of breaking through by taking part in the auditions for the Big Brother. From that moment on, however, his dreams of glory will turn into obsession

Song’e Napule of the Manetti Bros, of 2013, tells of the unemployed musician Paco Stillo, who by recommendation is hired as a policeman and finds himself infiltrating a band that will play at the wedding of a Camorra

Diabolik, the new trailer for the Manetti Bros movie

Ferzan Özpetek conducts in 2017 Veiled Naples, in which the coroner Adriana (Giovanna Mezzogiorno) has a passionate encounter with the young Andrea (Alessandro Borghi), who the next day discovers that he has been brutally killed

And here we are It was the hand of God by Paolo Sorrentino, a film now in cinemas and available from December 15 on Netflix (and also visible on Sky Q and via the app on Now Smart Stick), in which the Neapolitan youth of Fabietto is told, whose life is shaken by a terrible accident

It was the hand of God, the review of the film