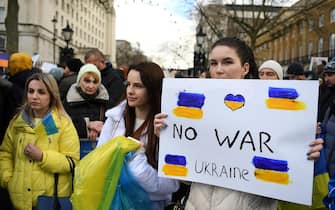 Ukrainian flags waving, banners praising the peace, billboards attacking Vladimir Putin. Today, February 24, several people have chosen to take to the streets and demonstrate against the invasion of Russia into Ukraine and, more generally, against a conflict that risks involving many countries with consequences that are only partially foreseeable. From Japan to Lebanon, from Poland to Turkey, this is where some of the demonstrations were organized

WATCH THE VIDEO: Ukraine, Draghi: what is happening affects all democracies

TO London people gathered in front of Downing Street, where the UK government is based

TO Brusselsthe demonstrators chose the area of ​​the European institutions

War in Ukraine, being fought in Chernobyl. Zelensky: “Russians want the power plant”

Also in the German capital, in front of the chancellery, another group of people gathered

Demonstrations and protests also in Bishkek, in Kyrgyzstan

In the Netherlands, a group of people gathered in front of the Russian embassy in The Hague with Ukrainian flags and banners that read “Stop the war” and “Stop Russia”. Demonstrations were also organized ad Amsterdam where some took to the streets despite the rain

Why Russia invades Ukraine, the reasons behind the war

There is strong opposition to war and Russian imperialist policy in Poland as well. In the photo, an image of the event organized in the capital, Warsaw

In Italy, some Ukrainian citizens organized a demonstration a Rome. They found themselves in Castro Pretorio, near the Russian embassy

TO Barcelonasome Ukrainian immigrants instead met outside the Russian consulate

Not just Europe. The rest of the world is also watching with growing concern at what is happening in Ukraine and takes to the streets to express its opposition. Here the photo of a demonstration organized in Tokyoin Japan

In Istanbul, in Turkeythe demonstrators gathered in front of the Russian consulate and displayed banners with strong condemnations

Here the photo of an event a Beirutin Lebanon

Calls for peace also come from Pakistan. This billboard was exhibited in Lahore