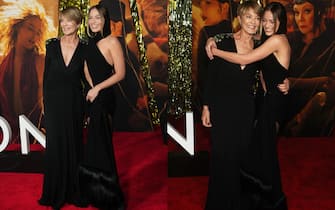 Margot Robbie gave her fans a fashion moment vintage inspired at the California premiere of Babylon. The actress, who plays up-and-coming star Nellie LaRoy in the film, sported a model hoodedwith hood, from the Maison Alaïa designed by Pieter Mulier with a feathered edge that suggests the style of old movie stars. Robbie arrived at the screening with her mother, Sarie Kessler

A few more shots of the muse of Scorsese and Tarantino with her mother both gorgeous in black. Robbie’s wardrobe is curated by fashion stylist Kate Young

Babylon, new trailer of the film with Margot Robbie and Brad Pitt

Brad Pitt mixes, even for this occasion, elegance and informality and on the red carpet he shows up with an impeccable tailored suit with shiny fabric that he wears strictly only with a shirt, moreover with two open buttons

Babylon, after the first screening, Chazelle’s film is already dividing the critics

Complete with black tie, however, for Tobey Maguire, another of the leading names in the stellar cast of the film. The 47-year-old is also one of the film’s producers

Babylon, unveiled the release date of the film with Brad Pitt and Margot Robbie

For the appearances that count, Olivia Wilde never betrays total black. Her look for her premiere is completely in her style, sexy and chic, but this time her stylist Karla Welch has added a sophisticated touch too rock-romanticevident in the flounced dress that highlights the legs, and in the fabric flower pinned to the lapel of the blazer

Babylon, the first photos of Brad Pitt and Margot Robbie

To evoke the spirit of times gone by, Elle Fanning’s stylist, the famous Samantha McMillen, aimed directly at a vintage dress, an Alexander McQueen with a knot and front frappe. In her simplicity, the actress next to Max Minghella (the latter, in the cast) was certainly perfect

Brad Pitt, Margot Robbie and Tobey Maguire on the set of Babylon

Classic style also for Rebecca Rittenhouse, impeccable with her high chignon that enhances the neckline of the candy pink Khoon Hooi dress with shiny crystal embroidery, a midi model that is bon ton and contemporary at the same time

One of the most notable dresses of the première is undoubtedly that of Kelly Rowland, an Iris Van Herpen haute couture creation that bears the unmistakable signature of the Dutch designer in the ruches, front design and pleated skirt. The right dress for staying with photographers for a long time

Avatar 2, the most beautiful looks of the premiere from Heidi Klum to Henry Cavill

Jean Smart, born in 1951, is a diva to all intents and purposes, and with her tunic dress that has a rich design in the openings that form the sleeves, she has nothing out of place and is one of the best dressed of the soirée

Taylor Hill, host of the preview, showed off a Balmain creation that walked the runway with the Spring Summer 2023 collection. The supermodel completed the look with a messy bun

Diego Calva, one of the main performers of the film, posed with set mate Margot Robbie. His style, with his three-piece pinstripe suit and slicked-back hairdo, echoes that of the men who populated the Mecca of cinema in its heyday

Couple photo for Damien Chazelle and Olivia Hamilton, both in Dolce and Gabbana dresses styled by Ilaria Urbinati. Chazelle, director of the film was the youngest author to win an Oscar. His wife also has a role in the film

A masculine look for Hannah Einbinder who arrived at the preview wearing a forest green velvet tuxedo and bow tie, also a tribute to the androgynous looks of some past divas

Even Flea, a musician with a passion for cinema, returns to play a small part on the small screen. In Babylon Red Hot Chili Peppers bassist, who arrived at the premiere in a pink and red Paisley-patterned look, plays fixer Bob Levine

Jovan Adepo chooses brocade, and the always suggestive combination of gold and black, who plays the role of a talented black musician in the film

Li Jun Lee, who is honored to play a role based on legendary Chinese-American actress Anna May Wong in the film, sported a vibrant tulle frill and ponytail creation with perfect hairstyle and makeup for the gown