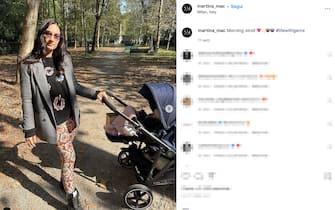 Martina Maccherone suffered a theft in her apartment in Milan. The influencer posted on Instagram the video of the four alleged thieves who run away with the loot. Chiara Ferragni, her great friend, also shared the images of the alleged robbers, a video showing four women walking away with envelopes. Image from the official Instagram profile of Martina Maccherone

WATCH THE VIDEO Chiara Biasi, who is the influencer

In October 2021, the 31-year-old Italian influencer and model Chiara Biasi was the victim of a theft in her Milanese home in Via Palestro. A rich loot worth thousands of euros was stolen: luxury clothes and accessories as well as many technological devices. Image from Chiara Biasi’s official Instagram profile

In December 2019 Taylor Mega was a victim of thieves. Of the theft in the home of the influencer in Milan, in the Brera area, the images were published on Instagram by the person concerned. Image from Taylor Mega’s official Instagram profile

Unfortunately, in December 2020 it was also the turn of Giulia De Lellis who, through social networks, reported that she had been robbed. Many packages have been stolen from her, among those that the influencer receives every day (including products for sponsorships and online purchases made by her). Image from the official Instagram profile of Giulia De Lellis

British model, TV presenter and influencer Tamara Ecclestone was the victim of a record theft of jewelry in December 2019: a value of 50 million pounds, almost 60 million euros. The residence of the then 35-year-old daughter of Bernie Ecclestone, as reported by The Sun, was burgled by 3 individuals who entered the garden. Image from Tamara Ecclestone’s official Instagram profile

In June 2020, Diletta Leotta was robbed. On the night of June 6, the presenter reported having suffered a theft, documenting that she had discovered the intrusion of thieves into her home. When she got home on the ninth floor of her apartment in Corso Como, she found a forced French window, the house in total disorder and she noticed that several jewels and watches had disappeared. The safe was also stolen, for a loot exceeding 100,000 euros. Image from Diletta Leotta’s official Instagram profile

Chiara Ferragni, the story of the queen of digital entrepreneurs. PHOTO

In September 2020 Beatrice Valli shared some stories on her Instagram profile in which she reported that she had been robbed. To be stolen – from her and her partner Marco Fantini – were above all the couple’s clothes, very expensive clothes. “They came to steal everything we had,” said the influencer. Image from Beatrice Valli’s official Instagram profile

From the influencer to the youtuber: who I am (and how to become) webstar

In November 2019 Tommaso Zorzi was the victim of a joke rather than a real theft. And not at home but in the hotel. Guest at the hotel, friends stole his clothes from his room. “They ransacked my room and when I went back I found the door open, the suitcase outside and there was no trace of the clothes, shoes and computer”, he explained Zorzi in a series of stories posted on Instagram. “I am crazy”. Image from Zorzi’s official Instagram profile

Not a home theft but certainly a theft to remember: the Mexican influencer Bernardo Logar in November 2019 saw his KTM 690 motorcycle stolen. Something that was very important to him, also because he was traveling around the world right in the saddle of this one, affectionately renamed by him with the name of Rebecca. Started in 2017 when he was only 19, Logar and Rebecca crossed two continents together and traveled over 130,000 km. Arrived in Catania in 2019, his bike was stolen. Image from Bernardo Logar’s Instagram profile

Not robbed at home but still robbed was also Chiara Ferragni. It happened several years ago, before he became the influencer we all know today. During an interview for Marie Claire Italy, the entrepreneur said that a long time ago she had saved around 400 euros to buy her first “speedy”, a Louis Vuitton handbag. While she was on the subway, however, her wallet with her savings was stolen. Image from Chiara Ferragni’s official Instagram profile

Chiara Ferragni: the most beautiful looks to copy using the sales