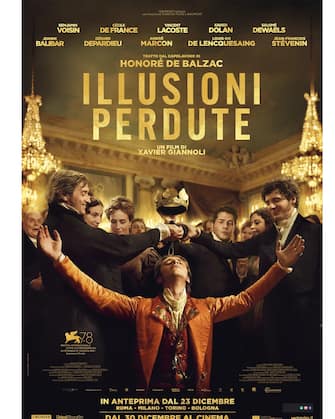 On December 30th it arrives in Italian cinemas Lost illusions, the film that enchanted at the last Venice International Film Festival

Lost Illusions, the film based on Balzac arrives at the cinema

Lost Illusions is an exciting cinematic adaptation of one of Honoré de Balzac’s most popular masterpieces. The film elegantly respects the setting in nineteenth-century France, after the fall of Napoleon, but above all the absolute modernity of the novel is exalted, which makes us reflect intensely on the harsh confrontation between the daring youthful hopes (well embodied by the good interpreter Benjamin Voisin ) and the “human comedy” of the harsh daily reality

Out on December 30th, The Befana comes at night 2 – The origins, directed by Paola Randi, totally changes cast and setting compared to the first chapter which had a good success three years ago

La befana comes at Night 2, the trailer for the film

The sequel goes to the origins of the legend of the old woman with the flying broom, in the eighteenth century, when a girl (Zoe Massenti) is unjustly persecuted by a noble villain (Fabio De Luigi). But luckily, as befits any good fantasy, a beneficial witch (Monica Bellucci) intervenes. The pace is also ensured by the presence of other good actors such as Alessandro Haber, Corrado Guzzanti and Guia Jelo

Monica Bellucci, the most beautiful photos

Distributed by Vision, on January 1st it comes to theaters Belli Hello, directed by Gennaro Nunziante (who wrote most of Checco Zalone’s hits) and starred by the comic couple formed by Pio and Amedeo

Belli ciao, from the South to Milan with Pio and Amedeo

The goal of Belli Hello is to make people laugh as hard as they can, but the opportunity to address the important issue of emigration to the North of so many southern young people is well exploited. In fact, the inseparable friends split: Pio went to make his fortune in Milan, while Amedeo chose to stay in Puglia. But the cases of life mean that they have to come back to collaborate … of course among many amusing paradoxes

Pio and Amedeo, the photostory

The first day of 2022 also arrives Matrix Resurrections, the fourth installment of the saga that since 1999 has revolutionized science fiction on the big screen. Directed by Lana Wachowski (this time without her sister Lilly), the blockbuster brings the always athletic Keanu Reeves back into action together with Carrie-Anne Moss

And the contrasted love story between Neo and Trinity has a central space in the development of the story of Matrix Resurrections. But undoubtedly there is no shortage of special effects in abundance and above all the proverbial “bullet time”, with the inevitable amount of hissing bullets dodged at the last minute.

Me against you. Lost in time. The couple of Sicilian youtubers Luigi Calagna and Sofia Scalia, or for all their numerous little fans Luì and Sofì, as always directed by Gianluca Leuzzi. Now no one is surprised anymore by their extraordinary collections, which aim to be repeated with this chapter which includes a time journey that magically takes them to ancient Egypt, where they must defend themselves from the evil ones. But luckily they can count on many friends

Me Against You, announced the third film of the Youtuber couple

From 5 January arrives in cinemas, The King’s Man – the origins, the film that unveils the birth of the first independent intelligence agency

Thee King’s Man – The Origins, the new trailer and the poster of the film

he King’s Man – The origins, the final trailer of the film

Presented in competition at the 74th Cannes Film Festival, where it won the Special Jury Grand Prix, A hero arrives in Italian cinemas starting from 5 January

Written and directed by Iranian director Asghar Farhadi, A hero tells the story of Rahim. In prison due to a debt he has failed to repay, taking advantage of a two-day leave, he tries to persuade his creditor to withdraw the complaint for part of the sum due. But things don’t go according to plan

January 5 arrives at the cinema The Crusade, directed and starring Louis Garrel. Also in the cast is Laetitia Casta, wife of the director

The best films of Louis Garrel

The Crusade tells the story of Bel, Marianne and their 13-year-old son Joseph. The three live together in Paris and their daily existence is turned upside down the day they discover that Joseph, unbeknownst to them, has sold some valuables taken from the house to finance a mysterious ecological project that he is carrying out in Africa with his friends. in order to save the planet

All the news on Laetitia Casta