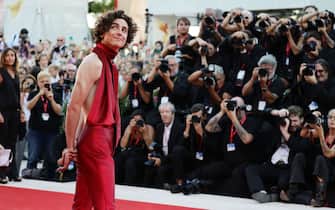 Timothée Chalamet leads the ranking of the coolest of 2022, a season that once again saw him as a great protagonist of the red carpet. His sensational appearance at the Venice Film Festival where in red suit, trousers and top with open back Haider Ackerman, rewrote the codes of menswear

Thanks to the incredible styling work of the excellent Karla Welch, Olivia Wilde rightfully enters among the best dressed of 2022 and with her ultra-designer clothes, among which many Gucci, Saint Laurent and Dior looks stand out, she is always up to the standards events in which she participates as one of the most interesting female voices in Hollywood

Rihanna’s pregnancy looks are unparalleled in the history of fashion and pop culture. With each release of her public, the Barbadian singer has managed to amaze her fans more and more up to real exploits that have consecrated her forever in the Olympus of fashion icons

Famous for their expansiveness in public (and in favor of the objective) Kourtney Kardashian and Travis Barker have become real reference points of the gothic style that has established itself among the main fashion trends of 2022. There is no doubt that Kardashian’s style has benefited from the entry into her life of her new husband, punk-rock icon of Blink-182. The result? An aesthetically flawless rock and baroque wedding

The writers of Euphoria 2 have given Sydney Sweeney a strong and prominent role and the 25-year-old actress has also demonstrated talent off the set by interpreting some of the main trends of the year. Among her most famous looks of the season, her one for the MTV Movie & TV Awards, a Miu Miu suit in full Y2K style

WATCH THE VIDEO: Sydney Sweeney, who is the actress

Brad Pitt has lost his mind. Or he found her. In any case, the actor of bullet trains, which this season he also produced Blonde by Andrew Dominik, this year definitely made us have fun with his sneakers on the red carpet, his flamboyant suits, jumps, culottes. Proof that for stars of his caliber time has not only stopped but can even flow in reverse

Few knew Jenna Ortega before Wednesday but since the first episode of Tim Burton’s show it was clear to anyone that the Californian actress born in 2022 was not only good but also full of things to say in terms of style. Her stylist Enrique Melendez, off her set, almost always dressed her in black, accentuating her adherence to the iconic Addams family character in a winning and convincing game between reality and fiction

Angel face and look, wild spirit. Thus Blanco also stole the heart of the public who did not know him before the Sanremo Festival. Those who already knew him, especially the very young, had no doubts that Riccardo Fabbriconi would bring some of his irresistible charm to Ariston too, made even more sophisticated by the Maison Valentino dresses selected by Silvia Ortombina of Tiny Idols

Blanco, photostory of the winner of Sanremo 2022 with Mahmood

The comeback by Ryan Gosling, back on track with The Gray Manwas chromatically interesting and her outfits for the screenings of the streaming film were just a taste of what her stylists will be able to do next year with the release of Barbie. We are already anxiously waiting

Florence Pugh has found in Maison Valentino the perfect partner to carry out that necessary style revolution now that Hollywood has recognized her as one of the most interesting interpreters of her generation. Celebrity stylist Rebecca Corbin-Murray took care of her image of a rebel doll

Overseas the media swear that 2022 was her year and already at the beginning of the season, when she appeared at the fashion shows with her eyes covered by Kanye West’s arm, many said she had come to stay. Julia Fox, with her fetish-core shock looks, dominated the streetstyle bringing a bit of her style even on the catwalk, going from underground icon to global idol in a few months

What will become of Harry Styles now that the divorce between Alessandro Michele and Gucci has taken place? Will the English pop star keep her partnership with the Italian brand? The answers will come in 2023, meanwhile we just have to lose our heads with the looks sported by the singer and actor who in the last season also put himself to the test with fashion which is undoubtedly a field in which he has always had a lot to to say

David Harbour, in great shape in the last season of Stranger Thingsamazed everyone with his themed look on the occasion of the premiere of the highly appreciated show but it must be said that with every appearance on the red carpet the American actor knows how to steal the show

Consent for his performance in Elvis, the musical blockbuster by Baz Luhrmann, was equal to that for the looks selected for the long promotional tour of the film. Austin Butler, Californian, born in 1991, ends up straight on the list of the most stylish of the 2022 season

Thanks to White lotus ea show with record views like The Watcher, Jennifer Coolidge has returned to occupy a prominent place among Hollywood stars. The actress has responded to her renewed fame by offering the public of her fans a series of diva looks camp which perfectly describe his exuberant personality. Here it is at the 2022 Emmy Awards in Dolce and Gabbana