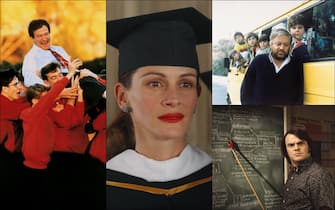 October 5 is World Teachers’ Day, a way to remember the importance of their role in the education of the youngest. From “The fleeting moment” to “Mona Lisa Smile” to “I hope that I can manage”, the world of cinema celebrates these important figures with numerous films dedicated to school and the difficulties that teachers may encounter ( in the photo, from top left, a scene from: “The fleeting moment”, “Mona Lisa Smile”, “I hope that I can manage” and “School of rock”)

The 20 most famous grandparents in cinema

The most famous teacher on the big screen is certainly Professor John Keating, played by an amazing Robin Williams, in Peter Weir’s “The Fleeing Moment” of 1989. A literature teacher with nonconformist methods, Keating encourages his boys to follow the their dreams and get rid of social impositions and their families. He famous the phrase: “O captain! My Captain ”, incipit of a poem by Walt Whitman

Another teacher ready to break the rules of a society in plaster is Katherine Ann Watson / Julia Roberts of “Mona Lisa Smile”, a film by Mike Newell of 2003. Professor of art history, she finds herself working in a prestigious boarding school for girls. whose goal is to prepare female students for married life. In contrast to the institute’s rules, Watson offers his girls new perspectives

In “Io speriamo che me la cable”, a 1992 masterpiece by Lina Wertmüller, an insight into the situation of schools in the Italian suburbs is shown. Elementary teacher Marco Tullio Sperelli, played by Paolo Villaggio, is transferred from Liguria to a school in the Neapolitan area. He finds himself dealing with a highly problematic reality in which he will try to direct his children to study and get away from the street

Robin Williams took on the role of another notable “teacher”, part that earned him an Oscar for Best Supporting Actor, in “Will Hunting – Rebel Genius”, a 1997 film by Gus Van Sant. In the role of Dr. Sean Maguire tries to make Will Hunting understand and teach how to exploit his skills, a math prodigy boy who does the cleaning at MIT

“Freedom Writers” is a 2007 film by Richard LaGravenese, which tells the story of Erin Gruwell (Hilary Swank), a teacher who chooses to dedicate herself to a social rehabilitation course for young people of different ethnic groups who have had problems with the law

The teachers, at times, are also very strict and ruthless like the Terence Fletcher of “Whiplash”, a film by Damien Chazelle of 2014. Andrew, a boy who dreams of becoming one of the best jazz drummers in the world, does everything to get into the best orchestra of the prestigious conservatory in which he studies and is appreciated by the inflexible Fletcher, played by JK Simmons

In “School of Rock”, a musical comedy by Richard Liklater of 2003, a penniless musician played by Jack Black, on the other hand, finds himself teaching in a prestigious private school where he manages to persuade his students to abandon the classical style and set to throw yourself into the rhythm of rock

“Detachment – The Detachment” is a 2011 film by Tony Kaye (Adrien Brody), in which a substitute teacher of literature, Henry Barthes, manages to overcome the barriers with his difficult students

“La scuola” by Daniele Lucchetti shows different types of teachers in a realistic and plausible framework. The teaching staff is made up of the listless teacher, the sadist, the distracted and those who really have a passion for their work

From France comes “La classe – Entre les murs”, a 2008 film by Lauren Cantet with a documentary slant, in which the protagonist (François Bégaudeau) is a teacher struggling with pre-adolescents and a multicultural class

“Monsieur Lazhar” is a 2001 film by Philippe Falardeau in which the teacher Lazhar, an improvised teacher in an elementary school, tries to make children understand that life is made up of joy and pain, strength and fragility

In a multi-ethnic class full of social conflicts, history teacher Anne Gueguen works in “Once in a Lifetime”, a 2014 film by Marie-Castille Mention-Schaar. The teacher decides to involve her complicated class, whose majority is Muslim and tends to ignore the Shoah, in a competition on the topic of Jewish genocide. The students accept the challenge and the teacher obtains incredible results from them

In “The Teacher”, a 2016 film by Jan Hrebejk, the arrival of the new teacher Maria Drazdechová is a way to talk about the theme of education, children and the need, sometimes, to take risks to make one’s future better.

“The professor changes school”, a 2017 film by Olivier Ayache-Vidal, finally talks about a teacher at a prestigious high school in Paris who complains about the lack of valid teachers in suburban schools. The complaint is acknowledged and he is forced to accept the transfer, for a year, to a school very different from the one in which he taught.