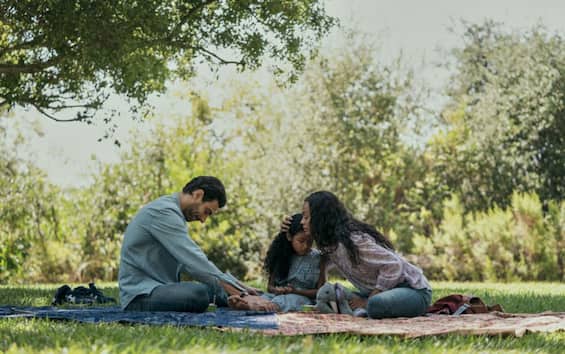 
From Scratch – The strength of a love primarily has the merit of reminding us how lucky it is to live in a wonderful country like ours. A gift of good luck which Italians themselves often struggle to realize. They are therefore well produced as the new Netflix mini-series (also visible on Sky Q and via the app on Now Smart Stick), from 21 October in streaming, where an external eye also rests on all that beauty that we too often take for granted. . The platform that hosts this product, inspired by the events of Tembi Locke’s best-seller of the same name, has put online a nice backstage video that is very useful for getting into the mood of the series.

I restart from me

“A young black woman in her twenties studies in Italy for a semester and unexpectedly falls in love with an Italian chef”. Attica Locke herself (executive producer with her sister Tembi) explains the simple premise from which the series starts. The story told is partly that of the author Tembi Locke, who with her own From Scratch: A Memoir of Love, Sicily, and Finding Home he wanted to try “to erase the idea of ​​borders” because “wherever we are we all carry essentially the same things in our hearts”. The characters move between Florence, Sicily and Texas, looking for a place in the world that doesn’t necessarily have to be one. The young Amahle “Amy” Wheeler is filled with beauty, she wants to start living from scratch (or “from scratch”, if you prefer English) and her desire to live will eventually be transmitted to Lino, a chef who he went beyond family traditions to become a cook. The two protagonists give each other love and strength, eventually teaching their parents something they didn’t know or at least had forgotten. Playing Amy Wheeler is the star of Avatar Zoe Saldanawhich didn’t take long to get caught up in the project: “What fascinated me most was discovering what it was like to marry those who belong to the Italian culture”, said the actress who, after the series, discovered a few things about our homeland, like that is full of passionate people and a history that is difficult to erase.

“Love dominates without rules”, says the character of Lino to his beloved, guaranteeing her that “that’s what we say”. You may not remember hearing the very same sentence but the concept, at the basis of the whole story, remains acceptable. To give body to the protagonist, a bit romantic as a stereotype, is Eugenio Mastandrea. Here the Roman actor “pretends” to be Sicilian for screenwriting reasons, demonstrating a talent already expressed in the theater and in TV series such as The fugitive: “I think it’s a great love story and a great life story,” Mastandrea said of From Scratch. The Italian-American cast of the series counts, in addition to the two protagonists, too Danielle Deadwyler (Amy’s sister) and a great actor like Keith David (who plays her father). The Italian family is instead represented by Lucia Sardo (seen in fiction The honor and the respect) And Paride Benassai (Baarìa by Tornatore). “You don’t need a lot of things to do something beautiful, to live a life of art and beauty. You can do it ‘starting from scratch’ ”, Tembi Locke tells us, in a story that basically reminds us how little it takes sometimes to be happy. That recipe “eat, pray, love”, which made the success of another book then adapted, is more or less remembered here too. On the other hand, at least on the screen, it seems to work quite well.