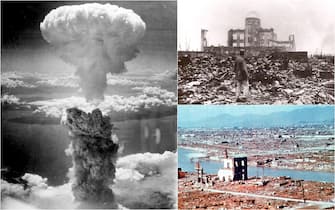 Since 1945 the US has used atomic bombs on Japan, the world has entered a new era marked by the Cold War, by the division of powers into blocs, by the strategy of deterrence. A planet where the tensions between the United States and Russia they could detonate one at any moment third world war with the use of nuclear weapons. Now the conflict in Ukraine has revived this possibility, with the fear that Putin’s Russia could resort to this extreme solution

WATCH THE VIDEO: Biden: “There is the threat of a nuclear Armageddon”

“For the first time since the missile crisis in Cuba there is the threat of nuclear ArmageddonUS President Joe said Biden speaking in New York. The reference is to the possibility that Vladimir Putin can use a tactical atomic weapon in the war in Ukraine. A choice that could trigger an atomic war, a risk that the planet has already run several times in recent decades. Here’s when

Nuclear Armageddon, the risk of atomic war and why Biden spoke about Cuba

THE SUEZ CRISIS – In November 1956, during the Suez Canal crisis, the US detected a series of suspicious military maneuvers, which at first were considered the beginning of a Russian offensive. An atomic response is also evaluated but in short it turns out that all the data collected were the result of coincidences or errors of interpretation

Tactical nuclear weapons, what they are and how they are used

THE MOON SUNRISE – On October 5, 1960, the radars of the Western Bloc in Greenland mistake the phenomenon of the lunar dawn in the skies of Norway for a possible Soviet nuclear attack. The US military enters a state of alert but the presence of the Soviet leader Nikita Khrushchev in New York for a UN assembly makes it clear that an offensive cannot be underway and that the assessments were wrong

Russia’s nuclear weapons: from strategic to tactics, there are almost 6 thousand

THE MISSILE CRISIS IN CUBA – So far it has been the time when the world has come closest to a nuclear conflict. In 1962 the Soviets installed a battery of nuclear missiles on the island, a few kilometers from Florida. In October Kennedy deploys the fleet but in the end the two super powers find an agreement and Khrushchev withdraws his weapons

Cuban Missile Crisis: What Happened in 1962 and How It Ended

THE NEARBY WAR – The tension in those days of October 1962 was very high and there are at least two episodes that testify it: there is the famous case of the Soviet nuclear submarine B-59 which, due to a series of evaluation errors, is ordered to launch a warhead nuclear power against the American fleet, with Deputy Commander Arkhipov refusing to obey the order, effectively averting nuclear war (in the photo a Soviet submarine during the Cuban crisis)

THE BEAR – Another incident, quoted in a book by William J. Perry and Tom Z. Collina which lists the 22 cases in which the world has been on the verge of nuclear war, occurred on October 25, 1962. In Wisconsin, an American soldier sees something trying to climb the fence of the military base. The alert is given and the wrong command is pressed at the nearby “Volk Field” airbase, ordering the pilots to board the nuclear-armed planes. Soon it is revealed that what he tried to enter the base was a black bear

THE PLANE DOWN – In April 1969, an American reconnaissance plane is shot down by a North Korean Mig in the Sea of ​​Japan. Retaliation is ordered and some planes are instructed to load nuclear bombs for a possible attack on North Korea. Shortly after the alarm returns. Several rumors over the years have revealed that President Nixon (pictured) was drunk when authorizing the mission, being blocked by Kissinger.

THE COMPUTER ERROR – It is November 9, 1979 when the Norad (North American Aerospace Defense Command) computers indicate an imminent Soviet nuclear attack. The highest US officials are informed that over 2,000 missiles are flying against America. President Carter has a few minutes to decide to order an atomic response of the same tenor. But after 6 minutes the Norad reports that it was a false alarm (in the photo a Norad control room in 1984)

THE FALSE ALARM – On September 26, 1983, a Soviet satellite reports the launch of a nuclear intercontinental missile headed for the USSR. Lieutenant Colonel Petrov (pictured) of the Soviet air defense system is convinced that an American attack with a single missile is not a plausible hypothesis and manages to pass his line even to the superiors. In fact it was a false alarm

THE CASE – In 1995, Russian President Yeltsin is the first world leader to activate a “nuclear briefcase”. Alarmed by the launch of a Black Brant rocket off the Norwegian coast, he prepares to launch an atomic attack. But within minutes it turns out that the rocket in Norway contained only material to study the Northern Lights

Ukraine, the US simulate scenarios in the event that Putin uses bombs and nuclear weapons