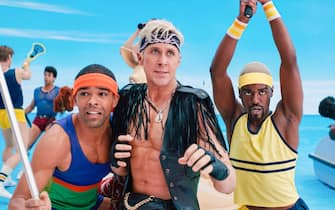 Let’s start immediately with one of the most anticipated films of 2023: Barbie, glossy film dedicated to the famous doll starring Margot Robbie and Ryan Gosling. Release: July 20th

Mission: Impossible – Dead Reckoning – Part One, the new teaser trailer of the film

There is great curiosity about the Creed III, third installment of the saga starring Michael B. Jordan, this time also engaged behind the camera. Release: March 2nd

WATCH THE VIDEO: Creed III, what we know

A year full of sagas: that’s it Scream 6, new chapter of the horror franchise that will see the return of Ghostface. Directed once again by Matt Bettinelli-Olpin and Tyler Gillett. In the cast also Jenna Ortega, recently made famous by the series Wednesday. Release: March 9th

Scream VI, all the surprises in the trailer of the film with Jenna Ortega

As we said, 2023 is a year of great returns: we’ll see in March John Wick with the fourth chapter of the saga. Directed by Chad Stahelski, while the protagonist will be (as always) Keanu Reeves. Release: March 23rd

John Wick 4, out the Italian trailer

Super Mario Bros. – The movie, the trailer of the new animated film

Game to Movie: Also Coming Soon Dungeons & Dragons: Honor Among Thieves, which brings the magical and adventurous world of the legendary RPG to the big screen. Release: March 31st

Dungeons & Dragons, the official trailer of the film

Confirming that 2023 is the year of sagas, the release of Fast Xtenth chapter of the saga of Fast & Furious. The rich cast includes among others Vin Diesel, Jason Statham, Michelle Rodriguez, Jason Momoa, John Cena, Brie Larson, Cardi B, Helen Mirren and Charlize Theron. Release: May 18th

WATCH VIDEO: Everything we know about Fast and Furious 10

Much talked about but certainly interesting live action The little Mermaiddirected by Rob Marshall and based on the 1989 animated classic of the same name. Release: May 23

WATCH THE VIDEO: The Little Mermaid, what we know about the live action film

Among the great returns, also that of Harrison Ford aka Indiana Jones, protagonist of Indiana Jones and the Wheel of Destiny. Release: June 30th

Christopher Nolan directed Oppenheimer, a historical thriller that chronicles the life of physicist Robert Oppenheimer, manager of the Los Alamos Laboratory, during the Manhattan Project, which led to the creation of the first atomic bomb. Release: July 20th

Oppenheimer, the trailer of the new film by Christopher Nolan

Dunes – Part II is a highly anticipated sequel, which will bring Denis Villeneuve’s science fiction blockbuster back to the big screen, based on the first book of the homonymous saga by Frank Herbert. Release: November 3rd

WATCH THE VIDEO: Dune 2, everything you need to know

As far as Italian cinema is concerned, it is certainly awaited with curiosity Diabolik 3 by the Manetti Bros., the last chapter of the trilogy of the thief of Clerville. Release: November 15th

Matteo Garrone returns with I captain, the adventurous journey of two young people who leave Dakar to reach Europe. Output: to be defined