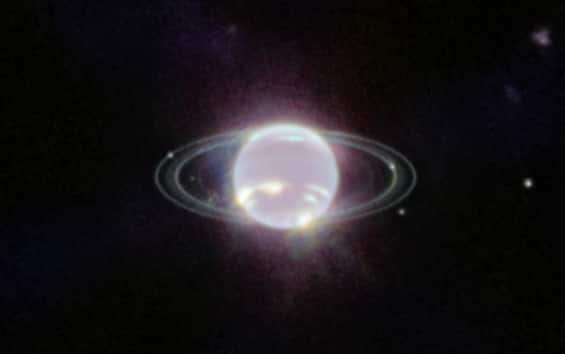 The James Webb Space Telescope has managed to acquire the sharpest view of Neptune’s rings in 30 years now. The news is given by ESA, the European Space Agency which, together with NASA and the Canadian Space Agency (CSA), coordinates the activities of what is called “the largest and most powerful telescope ever launched into space”.

One of the sharpest versions of the planet since 1989

The image, explains ESA on its website, was acquired on 12 July 2022, and represents, as mentioned, one of the clearest versions that immortalize the rings of the planet, some of which had never been seen yet, since close passage of the Voyager 2 probe in 1989. In addition to several bright rings, the images of the Webb telescope also managed to show quite clearly the “weaker” rings of Neptune and seven of its 14 satellites. All this also thanks to the help of the on-board instrument NirCam (Near-Infrared Camera)

The characteristics of Neptune

Neptune, ESA experts continue, has fascinated researchers since its discovery in 1846. Positioned 30 times farther from the Sun than the Earth, it orbits in one of the darkest areas of our Solar System. It has the characteristics of an ice giant due to the chemical composition that distinguishes it and, compared to gas giants such as Jupiter and Saturn, in addition to hydrogen and helium it is rich in elements such as ammonia and methane, while the inner part of the planet it is mostly made up of rocks and ice. And it is precisely the traces of methane in the upper layers of its atmosphere that contribute to making the planet appear a particularly intense blue color. In the image captured by Webb, however, Neptune does not appear as blue as one might think, because the telescope makes its observations in the infrared, the part of the electromagnetic radiation that we cannot see because it has a frequency lower than that of visible light.

The most “unusual” moon

Webb, as mentioned, also captured seven of Neptune’s 14 known moons. What stands out in the image is a very bright point of light that shows the characteristic diffraction peaks seen in many of the images already captured by the telescope. This is not a star, but Neptune’s most “unusual” moon, Triton.