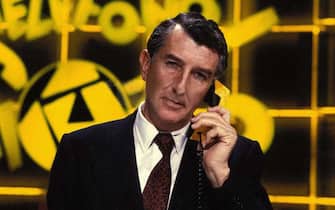 Yellow phone was broadcast on Rai 3 from 29 September 1987 to 8 December 1992, conducted by Corrado Augias and, only in the first edition, also by Donatella Raffai

Samarkand it was a RaiTre talk show, aired from 1987 to 1992. The authors of the program were the TG3 journalists Giovanni Mantovani and Michele Santoro, who was conducting from the studio. Later the authors were Santoro together with Simonetta Martone

Who has seen? is one of Rai’s longest running programs, still broadcast in prime time on Rai Tre today. The first historical presenter was Donatella Raffai

Blob, everything more, or more simply Blob, was broadcast in 1989. It is one of the longest running programs on Rai 3 and Italian television. It was conceived by Angelo Guglielmi and by the film critics Enrico Ghezzi and Marco Giusti

One day in the district court it aired on Rai 3 starting from January 18, 1988. Conceived by Roberta Petrelluzzi, who is also its host and director, together with Nini Perno. It is the third longest-running broadcast of the third Rai network after TG3 and Geo. The broadcast is the evolution of the In pretura program, which was also broadcast on Rai 3 from 1985 to 1987

The girls’ TV was a comic-satirical television variety broadcast on Rai 3. It was born from an idea of ​​Serena Dandini, Valentina Amurri and Linda Brunetta and was conceived as a container of comic sketches made exclusively by actresses. The direction was entrusted for the first cycle to Marilena Fogliatti, and for the second to Franza Di Rosa

Leftovers was a comedy and satirical program broadcast on Rai 3 in three editions, the first from 25 February to 13 May 1991. It was created by Valentina Amurri, Linda Brunetta and Serena Dandini who was also its presenter

Those who football it made its debut on Rai 3 on September 26, 1993 conducted by Fabio Fazio and Marino Bartoletti with the participation of sports journalists such as Carlo Sassi. Its name derives from the title of the song (which was initially also the theme song of the program) Quelli che …, composed and sung by Enzo Jannacci

Cursed Stories is an Italian television program born in 1994. The creator and host of the program is Franca Leosini

Hot line is a talk show, broadcast on Rai Tre in the 1987-1988 season, which marked the debut as host of the journalist Giuliano Ferrara.

Out of hours. Things (never) seen is a film container, which has been broadcast on Rai 3 at night since 1988