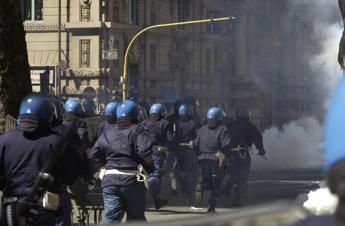 New hearing on February 24 at the Court of Appeal of Lyon for Vincenzo Vecchi, the former no globalist wanted for the events of the G8 in Genoa in 2001 and who had been arrested in France in August 2019 after an 8-year fugitive. This was stated to Adnkronos by his lawyer Maxime Tessier. Last November 29, the French Court of Cassation had decided to cancel the decision on Vecchi’s extradition to Italy and to refer the case again before a Court of Appeal, this time in Lyon after Rennes and Angers.

Vecchi, 49 years old, was sentenced, in a definitive sentence by the Italian Court of Cassation on 13 July 2012, to 11 years and 6 months for the violence that occurred during the G8 summit in Genoa. He had also received a 4-year prison sentence for some clashes that took place on the occasion of an anti-fascist demonstration in Milan in March 2006. As regards the sentence for the events in Milan, it was held in France that the sentence had been taken for granted and therefore one of the two European mandates has lapsed. Vecchi, originally from Bergamo, currently lives in Rochefort-en-Terre, in Brittany, since his release from prison, i.e. since 15 November 2019. Before his arrest he had worked for many years as a house painter while now he has found a job in housing construction eco-friendly in Nellembert, also in Brittany.

The case of the former anti-globalization Vecchi had already ended in France at the Cassation. After the November 2019 decision of the Rennes Court of Appeal which had decided on Vecchi’s release from prison, the Prosecutor of Rennes appealed to the Cassation. On 18 December 2019, the French Court annulled the sentence of the court of Rennes which had held that the procedure against Vecchi was void as the French prosecutor had not sent the name of Vecchi’s Italian lawyer to the Italian authorities and this, had established by the Court, had prejudiced the rights of the defence. The Court of Appeal of Angers, on the other hand, expressed its opinion on the merits of the matter, i.e. on the regularity of the European arrest warrant.

The Solidarity Committee for Vecchi expressed the hope in a note that the Lyon Court of Appeal “can finally put an end to this incredible judicial fury that has been going on for 3 and a half years” by rejecting Italy’s extradition request. “In view of this crucial hearing” the Comité de Soutien in Vincenzo continues its mobilization.

Last July the European Court of Justice, which had been requested by the French Court of Cassation, issued an opinion in which it underlined that France could not oppose the execution of the European Arrest Warrant and therefore Vecchi’s extradition.