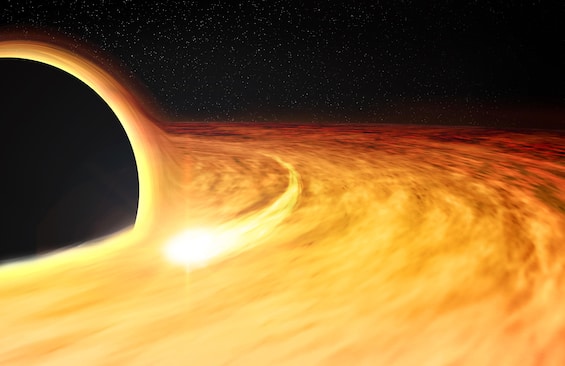 The closest black hole to the Earth has been discovered: it is located 1,300 light years from us, has a mass of 10 times that of the Sun and is called Gaia BH1. It was identified by a group of researchers coordinated by the Harvard & Smithsonian Center for Astrophysics and the Max Planck Institute thanks to data from the European space telescope Gaia and the Gemini telescope in Hawaii in an article published in the Monthly Notices of the Royal Astronomical Society.

About 100 million black holes in our galaxy

It is estimated that within our galaxy there are about 100 million black holes of various sizes, with a mass between 5 and 100 times that of the Sun, but identifying them is an almost impossible challenge unless you observe them. at the exact moment when large quantities of materials fall into it, attracted by their intense gravitational field. In those moments they become ‘active’ that is, they emit intense radiation visible from our instruments. The vast majority of black holes are instead in a ‘dormant’ state and since they do not emit any radiation they are by definition invisible.

Gaia BH1 is located in the constellation of Ofiuco

However, using data from Gaia, the telescope of the European Space Agency (ESA) whose mission is to create a very detailed map of the stars of the Milky Way, the researchers observed a small anomaly in a star 1,300 light years away, in the constellation of ‘Ophiuchus. The star appears, in fact, to orbit around an invisible companion. By aiming the gaze of the Gemini telescope at it, the researchers were thus able to have certainty and understand, without a shadow of a doubt, that the star similar to our Sun orbits a black hole with a mass about 10 times larger. Gaia BH1 is the first and closest dormant black hole ever identified, three times closer than the previous record-holding black hole, which belongs to the ‘active’ type.