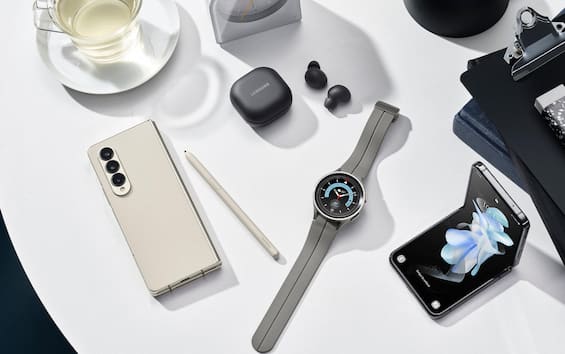 Samsung continues to focus on folding devices and during the usual August event Galaxy Unpacked has unveiled its new smartphones: the Galaxy Z Flip4 and the Galaxy Z Fold4. The news does not end there: the renewed line of smartwatches Galaxy Watch5 and Watch5 Pro and the wireless headphones Galaxy Buds2 Pro also arrive. story of all the news that await us.

Galaxy Z Flip4 has been defined by the South Korean house as “the ideal, inside and out, for self-expression”. It features an elegant clamshell design with a slimmer hinge, optimized edges, matte glass back and polished metal shell. It will be available in four colors (Bora Purple, Graphite, Pink Gold and Blue) but the novelty of 2022 is a version (Bespoke) that can be customized up to 75 combinations. The iconic Samsung smartphone, which looks like a “normal” phone when opened (the fold practically disappears), integrates a more useful external display with new features that allow you to read and respond to messages, make phone calls, control smart home objects or pay with Samsung Pay without opening the phone. Samsung also promises an improved photographic sector compared to the previous version, with more stable photos and videos, even at night thanks to a sensor capable of capturing more light. Galaxy Z Flip4 is powered by Snapdragon 8+ Gen 1 processor and has a 3,700mAh battery that supports fast charging. Starting price (which varies according to memory cuts) 1,149 euros.

Now the undisputed successor of the beloved Galaxy Note, the folding par excellence Z Fold4 improves even more with a view to greater multitasking and for the first time presents the Android 12L operating system, a special version created by Google for devices with wide screens. The software offers, among the many new features, a new taskbar similar to the one we are used to on the PC, which allows you to quickly access the apps we use most. There are many possibilities for customizing the screen and using multiple applications at the same time: Samsung has announced that the entire Office suite has been optimized and that Google’s apps also allow you to use drag & drop, just as if we were working on a PC. . Z Fold4 integrates a 50 megapixel main camera with 30x Space Zoom and also in this case there is a larger sensor for brighter shots and a whole series of photo modes that take advantage of the folding screen. The main 7.6-inch display houses – hidden – the front camera and has a refresh rate of up to 120 Hz. The Z Fold4, as well as the Flip4, explain from Samsung, become more resistant both internally and externally thanks to Armor Aluminum of the hinge shells and covers and the Corning Gorilla Glass Victus + of the external screen and rear glass; the devices are also IPX8 water resistant. Galaxy Z Fold4 is proposed in Greygreen, Beige and Phantom Black colors (there is also an exclusive Burgundy color on the Samsung website). List price (which varies according to memory cuts) certainly important: it starts from 1,879 euros.

Samsung also renews its Galaxy Watch line of smartwatches by presenting two new models (the 5 and 5 Pro) designed, they explain, to improve the user’s health and well-being habits thanks to new features. Thanks to the BioActive sensor, a single chip manages the detection of heart rate, electrical heart signal and bioelectrical impedance analysis by carrying out continuous measurements of heart rate, blood oxygen levels and stress levels. Also present the possibility to check blood pressure, make an electrocardiogram, measure body temperature. The smartwatch offers, as always, the possibility of tracking many types of sports training but also focuses on post-workout, recovery, rest, offering personalized advice and plans. Also present is the monitoring of sleep phases.

The 5 Pro version is dedicated to those who need even greater robustness: it is made of reinforced sapphire crystal capable – they promise – to withstand any type of wear and has a titanium case and a protruding touch bezel to protect the display. . The differences compared to the model 5 include a longer battery life and professional features for hiking or cycling routes. For both smartphones there are Bluetooth and also LTE versions to stay connected to the internet even in the absence of a phone. Galaxy Watch5 will be available from August 26 (pre-orders open today) in the large 44mm case model (Graphite, Sapphire and Silver colors) and with the small 40mm case (Graphite, Pink Gold, Silver colors) starting from 299 euros. Galaxy Watch 5 Pro will be available, however, at the starting price of 499 euros in the colors Black TItanium and Gray Titanium with a 45 mm display.

The new Galaxy Buds2 Pro earphones complete the new range of Samsung novelties for autumn-winter, offering – they explain – an immersive wireless audio experience, a compact design and a 24-bit Hi-Fi audio system that makes music and sounds richer. The new Auto Switch function is very useful, which allows you to switch “on the fly” from watching a film on your tablet to an incoming phone call on your smartphone, just to give an example. The headphones are made from 90% recycled materials, as part of the Galaxy for the Planet initiative. Available in Graphite, White and Bora Purple, the Galaxy Buds2 Pro have a list price of 229 euros.