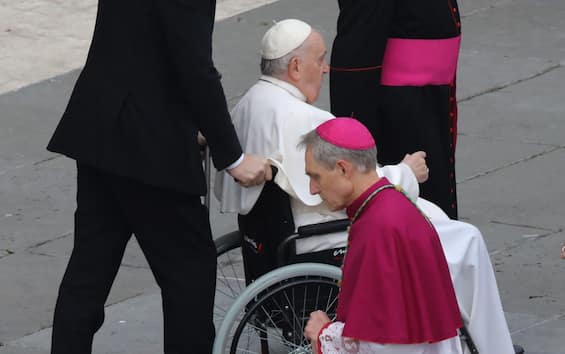 A little more than 24 hours after the funeral of Benedict XVI, tensions are high in the Vatican due to the outbursts of Ratzinger’s secretary, Monsignor Georg Gänswein. In the last few hours, the German archbishop has directed not exactly veiled criticisms against Pope Francis, contained above all in the book Nothing but the truth, written with the journalist Saverio Gaeta and which will be released next week. And Pope Bergoglio in the homily of today’s mass seems in some way to have wanted to respond by speaking of “betrayals” and “false news”, as well as reforming the diocese of Rome with a legislative text.

Gänswein: “Private sheets of all kinds must be destroyed”

Among the various things revealed by Gänswein, also Ratzinger’s will that his private papers be destroyed: “Private papers of all kinds must be destroyed. This applies without exceptions and without loopholes” – says the German archbishop – I received precise instructions from him, with delivery indications that I feel obliged to respect in conscience, relating to his library, the manuscripts of his books, the documentation relating to the Council and Correspondence”. Gänswein also reveals that, in addition to the spiritual testament that was published by the Vatican, Ratzinger left “annotations relating to some bequests and personal gifts, for the fulfillment of which I have the task of executor, have been gradually updated over the years, until the most recent addition of 2021”. It could be a material will with bequests relating to his collections of books and music, Benedict XVI’s secretary does not specify, but it is likely that a part of these earthly goods held by the emeritus Pontiff could be destined for his beloved Bavaria.

Gänswein: “I’ve never compiled anything on the Orlandi case”

In the book, Gänswein also talks about the case of Emanuela Orlandi, the girl from the Vatican who disappeared in 1983 and was never found again: “I have never compiled anything on the Orlandi case so this phantom dossier has never been disclosed solely because it does not exist” But the lawyer of the Orlandi family let it be known: “I went to see him at the Prefecture of the Papal Household when he was still substantially exercising the munus of Prefect and it was he himself who told me, among other things, that there was, indeed, a confidential dossier about Emanuela and that I should have insisted on having it delivered by the Secretariat of State. When I asked him to know its content, or at least some element of it, he reiterated that I should address my requests to the Secretariat of State. I hope the pages of the book are clarifying”.

Pope Francis: “The Lord meets in humility and silence”

Among the indiscretions on the book, several concern Pope Francis, who in today’s homily said: “Let us adore God and not our ego; let us adore God and not the false idols that seduce us with the allure of prestige and power, with the allure of false news”. Then speaking of faith he said that it also means facing “sufferings that dig into the flesh”. “In these moments those irrepressible questions arise from our hearts, which open us to the search for God” and among these: “Where is that love that does not pass away, that does not fade, that does not break even in the face of fragility, failures and betrayals?”. And again in the homily of the Mass for the Epiphany he reiterated that there is no room for that part of Catholics who look more at form than at substance and who don’t question themselves: “Faith doesn’t grow if it remains static; we cannot enclose it in some personal devotion or confine it within the walls of churches, but we need to bring it out, live it in a constant journey towards God and towards the brothers”. An answer that sounds like an indirect reply to another of Msgr. Gänswein, that of having “broken the heart” of Benedict XVI by deciding to limit recourse to the Latin Mass. Then at the Angelus Bergoglio he reiterated: “The Lord is encountered in this way: in humility and in silence”.

Bergoglio reforms the diocese of Rome

Bergoglio also sends another signal by reforming the diocese of Rome, the one closest to the Vatican and which for the Pope must be more “missionary” and more closely linked to him. He therefore puts pen to paper that the cardinal vicar, Angelo De Donatis, “will not undertake important initiatives or initiatives that go beyond ordinary administration without having first reported to me”. A tightening in the government of the Church, starting from Rome, which could give an idea of ​​the new course that the Pontiff intends to take. It is a normative text in which Bergoglio does not refrain from making remarks against those who go astray: “The Church loses its credibility when it is filled with what is not essential to its mission or, worse, when its members, sometimes even those who are invested with ministerial authority, are a source of scandal with their unfaithful behavior to the Gospel”.