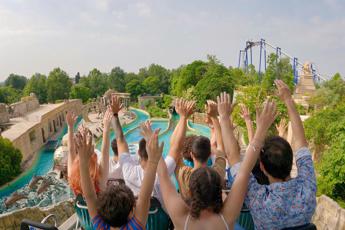 With the summer and the return of foreigners, it is hoped to reach pre-pandemic levels

Despite the great heat, there is a great desire for fun among the visitors of Gardaland Resort which continues a season that began successfully: excellent flows into the Park and Legoland Water Park Gardaland. “This year the season started in spring – says the CEO Sabrina De Carvalho – and this has allowed us to welcome visitors from all over Italy, who are 75%, but we also record, with satisfaction, the return of foreign tourists, mainly German, Austrian and Swiss for the remaining 25% ”. “From mid-June, in particular, with the opening of the Park until 11pm, we are registering 100% occupancy at LEGOLAND Water Park.” continues De Carvalho.


Throughout the summer, with Gardaland Night is Magic the Park extends its opening until 11.00 pm so as to allow visitors to continue experiencing the emotions of the attractions and shows in an even more suggestive atmosphere.

Inside the Park, green light for fantasy and dreams starting from the areas designed for the little ones of the house such as Fantasy Kingdom – with the unmistakable Parsley tree and many colorful attractions from Volaplano to Doremifarm – or Peppa Pig Land which offers not only the possibility to have fun on the three attractions available but also to meet the characters of the cute cartoon and take a nice souvenir photo with them.

The desire for adventure for the whole family is unleashed on the Adventure attractions where guests are transformed into real adventurers ready to face any kind of challenge. To try – first of all – is the brand new Jumanji® The Adventure dark-ride, an absolute novelty of the 2022 season and the only Jumanji themed attraction in the world, inspired by the Jumanji film series by Sony Pictures Entertainment. The Guests have a time-consuming mission to bring the sacred precious gem back to the legendary temple to save the kingdom of Jumanji from a curse.

A journey through 12 scenographic settings aboard special multi-motion vehicles in the shape of an off-road vehicle – the famous 4×4 vehicle of the film reproduced in detail – which, in addition to making a linear movement along the track, react to dangers, obstacles and audio and video effects scattered along the route rotating on themselves and swinging, simulating the movements of a real off-road vehicle. To make the experience even more immersive are the 7 screens, two of which are large, positioned in the attraction.

There are also many opportunities for a refreshing break, such as the scenic Escape from Atlantis where guests, aboard large boats, challenge the wrath of Neptune and venture in search of the lost civilization of Atlantis by demonstrating their courage with descents from 14 and 18 meters high.

Among the more than 40 attractions, the Adrenaline ones like Oblivion with its 42.5 meters high and a speed of 100 km / h are inevitable. The route is divided into twists, 360 ° rotations and steep descents at 87 ° inclination, capable of transmitting all the adrenaline possible in full Gardaland style but also offering breathtaking views of the nearby Lake Garda. No less is Raptor with the seats placed sideways to the track that give the sensation of being suspended in the void, the obstacles touched at the last second, three “overturns upside down”, a fall from 33 meters in height with an inclination 65 ° and a top speed at the limit of 90 km / h.

During the long day offered by Gardaland Resort – from 10 to 23 – absolutely unmissable is a refreshing stop at Legoland Water Park Gardaland where the little ones can return to have fun among colorful slides and millions of Lego bricks. Many are the attractions of the first Legoland Water Park in Europe, from the Miniland in which the most iconic monuments of Italy have been reproduced with Lego bricks, to the Lego River Adventure, a watercourse that crosses the Water Park to be covered by being carried away by the light current on board of inflatable boats that can be customized using large Lego-float bricks, passing through the Beach Party with its 7 slides and the large bucket that surprisingly pours a waterfall of water on children and Jungle Adventures, with slides suitable for the whole family. Fun is also guaranteed in the areas dedicated to creativity and discovery such as Lego Creation Island where you can build your own boat with Lego bricks, decorate a large sand castle or use large soft blocks to build giant walls. For the little ones there is Duplo Splash, an attraction where even the little ones can try the slides and learn through play while, the Pirate Bay, with its large swimming pool and the gradual entrance to the pool, is the place ideal for the whole family to swim, cool off or just relax.

The day at Gardaland Park cannot fail to end in Piazza Souk with the magic of the new “Arabian Night” show that immerses the viewer in the enchanted atmosphere of the Eastern nights, telling an imaginary fairy tale where the enchanted garden is threatened by the evil genius, but in the end, the space slowly comes back to life with colors, lights and positivity, until the final apotheosis marked by the fireworks. A multimedia show that places viewers at the center of the stage in a truly immersive experience thanks to the effects of videomapping projections and light effects. “If last summer we had already reached 90% of the admissions we recorded in 2019, for the current season we are very confident and we plan to return – at the end of the 2022 season – to pre-pandemic levels.” comments CEO De Carvalho.