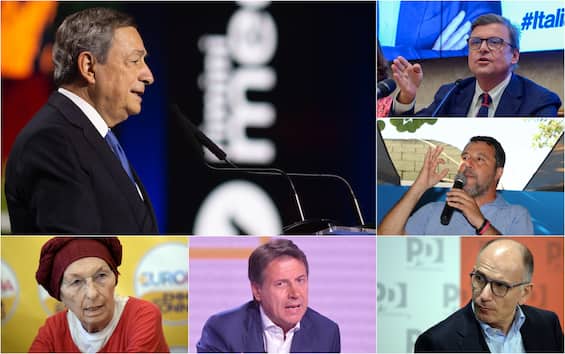 While the price of energy continues to fly, the leaders of the formations in the electoral campaign are pushing the premier to intervene to contain the cost of bills. From Calenda to Salvini to Letta, everyone is asking for extraordinary measures

As the price of gas continues to rise, and fear of a sting on the bill in the fall increases, any moves by the executive are expected to contain the spike in costs. The government has launched a first, complex survey to find the funds to be used for new aid to families and businesses. However, this is a difficult game full of unknowns because at the moment there is still no precise idea on how to recover the necessary money after a heavy intervention made with the aid decree bis of over 14 billion euros. Surely there will be no intervention with a deviation. And the parties, in the midst of the electoral campaign, begin to put pressure on the outgoing premier.

The requests of Letta and Salvini to the government

“The bill emergency is the main priority now”, said the secretary of the Democratic Party Enrico Letta. “We have presented proposals, as the other parties have done. The initiatives that the Draghi government will take are the most determined and timely both at national level than at a European level. They will find our support “. The leader of the Lega Matteo Salvini instead asked for an “armistice” to the other political forces to give “a full mandate to the government in office to do exactly what Macron did” against the expensive bills, setting the ceiling for increases in electricity and gas bills: “We have quantified the” necessary resources “to block the increases in bills at 30 billion euros. Let’s meet and give Draghi a full mandate to bring this proposal to the CDM”.

The first to respond to the appeal is the party of Carlo Calenda who, in recent days, had proposed an electoral truce to put all the parties around a table with the government: “Salvini basically accepted Calenda’s proposal for a time out of the electoral campaign and the need to gather around a table to offer President Draghi solutions against expensive energy “, explained sources of Action. “Thank goodness”, added Carlo Calenda: “At least one has arrived. After four days of insults, but he has arrived. Call it armistice or time out. It’s the same thing. Let’s meet tomorrow and try to find an agreement for avoid disaster “.

Sources M5s: “Conte has been asking for a comparison for some time”

The 5 Star Movement has long been asking for a comparison between parties on expensive bills. This was highlighted by sources of the M5s, interviewed by ANSA on the proposals of Carlo Calenda and Matteo Salvini for an understanding between the leaders, underlining that the Movement already raised the problem of electricity and gas costs six months ago, but was defined as “crazy” because he also spoke of deviation. Furthermore, the same sources note, “while Calenda was thinking only of the electoral campaign, Conte on August 19 wrote on Facebook that the campaign cannot hide these urgencies and proposed measures of immediate impact on which the M5s is ready to confront all political forces. “. On the other hand, Più Europa underlines that “Salvini proposes to give the mandate to Draghi on expensive energy” but “it would have been better for the Italians if Salvini had not sent him home, together with Conte and Berlusconi. Having said that, for days we say that it is up to Draghi, even though he has resigned, to take the initiative and will have our full support “. And Emma Bonino says she is “confident” that an extraordinary government intervention will arrive between Tuesday and Wednesday, “also possible in ordinary administration”.

Gasparri: “To intervene with a decree or amendment to the Aid”

From Italia Viva, Salvini’s proposal is greeted with irony: “Only two days ago the proposal made by Calenda and he declines teasing with an idiotic phrase such as: ‘he knows he is losing and wants to stop the electoral campaign’. Now he makes the same proposal as if it were his. Thanks Salvini, how did we not think about it before? “, said Davide Faraone. There is no need for a truce for Maurizio Lupi: “Draghi can carry out not only current affairs, Parliament can always be convened to approve a refreshment decree to help families and businesses, otherwise they close in September”, said the leader of We Moderates. Position similar to that of Forza Italia which, with Maurizio Gasparri, asks the government to act “either with a specific decree or by defining from now on an amendment to be included in the aid decree for examination by Parliament”.