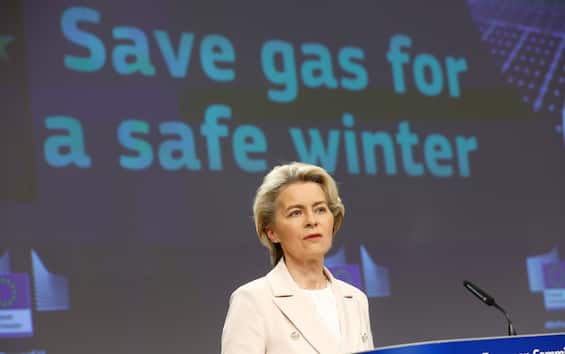 The EU is studying interventions to try to tackle the surge in gas prices and the kilowatt hour. Among the European chancelleries there would be an opening on the possibility of introducing a temporary ceiling on the price of gas imported and used in the production of electricity. Then there is the hypothesis of arriving more structurally at decoupling the price of gas from that of energy on wholesale markets. Today in Denmark the international meeting on energy independence from Russia

The gas issue continues to hold its own in Europe. The EU is studying emergency interventions, as well as a structural reform of the electricity market, to try to tackle the surge in gas and kilowatt hour prices and prevent a tragic domino effect on the economy of the Old Continent. The international meeting on energy independence from Russia is scheduled for today in Denmark, with Ursula Von der Leyen.

The opening on the “price cap”

A double solution seems to be emerging among the European chancelleries: there would be an opening on the possibility of introducing a temporary cap (“price cap”) on the price of gas imported and used in the production of electricity, to bring down the energy price; then there is the hypothesis of arriving more structurally at decoupling the price of gas from that of energy on wholesale markets. The European Commission is still working to clarify the feasibility of these proposals, but there is talk of a study in the final stages: a proposal from the European executive should arrive within a few days, to then give the floor to the comparison between the 27, in view of the extraordinary council of energy ministers, convened on 9 September in Brussels.

Among the last countries that have converted to the “price cap” are Austria and Belgium. Germany asks to act quickly, pushing above all for a reform of the energy market, but Berlin would also have opened on the “price cap”. And there is a persistent rumor in the capitals of a letter sent by the German Minister of Economy to the ministries of the environment of the EU countries in which reference is made to these initiatives. Meanwhile, Germany has reached 85% of stock. French Prime Minister Elisabeth Borne warned to prepare “for the rationing of electricity to businesses”. “The soaring electricity prices are exposing the limits of the current structure of the electricity market, which has been developed for different circumstances. This is why we are working on an emergency intervention and a structural reform of the electricity market. “Commission President Ursula von der Leyen said. “We need to do a far-reaching structural reform of the electricity market. This is early next year. We need an emergency instrument that acts faster. We are talking about weeks,” she added.

Once the Commission has formalized its proposal, clarifying above all what are the possible measures and whether there are legal obstacles to some hypotheses, the word will pass to the comparison between chancelleries, for a summary in the meeting at ambassadorial level (Coreper) on the agenda on 7 September, in view of the 9th Energy Council. The “price cap” is a request carried out for months by various EU states, Italy in the lead, with Prime Minister Mario Draghi ready to discuss it also at by G7. In April, between the 27, a ceiling was realized only in Spain and Portugal, not very interconnected and very strong on renewables. At the end of May, the Council gave the Commission an “invitation to explore” how to curb prices, followed in June by a new stronger “invitation” to pursue efforts to ensure “affordable” energy supplies. In May, the EU adopted a vast plan to become independent from Russian fossil fuels (Repower Eu) and introduced voluntary consumption caps (albeit with derogations) at the end of July, potentially mandatory in the event of an emergency on supplies. .