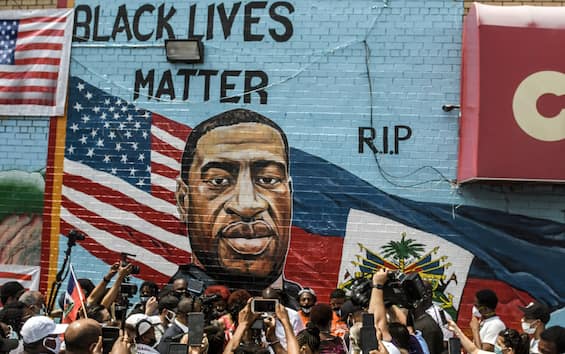 The rapper claimed that Floyd died from a fentanyl overdose on a podcast, sparking a $ 250 million lawsuit.
George Floyd’s daughter Roxie Washington’s mother is suing Kanye West for $ 250 million after the artist alleged that the 46-year-old man died of drug abuse rather than being murdered by an agent. police.

The statements of Kanye West

On Saturday, October 15, in the Drink Champs podcast, West (who legally changed his name to Ye) claimed that Floyd died from a fentanyl overdose. “In the same interview, which has since been removed from YouTube, West also made anti-Semitic comments,” as reported by British journalist Erum Salam in the British newspaper. The Guardian.

Kanye West’s claims are false, as Hennepin County Chief Medical Examiner Dr. Andrew Baker testified that the immediate cause of Floyd’s death was “cardiopulmonary arrest which complicated weak compression, containment and of the neck of the police “, that is the arrest of Floyd’s heart and lungs, arrest caused by those who prevented him from breathing (the police officer).

The order against West

Attorneys representing Roxie Washington (attorneys from Witherspoon Law Group and Dixon & Dixon Attorneys at Law) filed an order against West which reads: “Mr. Floyd’s cause of death is well resolved through evidence presented in the courts during the criminal and civil trials that resulted from his untimely and horrible death. Nonetheless (Kanye West-Ye) made mischievous inaccurate and unfounded statements, causing damage to Mr. Floyd’s property and his family ”.

George Floyd was assassinated in May 2020. His death sparked international outrage and fueled a debate on police brutality in the United States of America.
This debate was opened after Minneapolis white police officer named Derek Chauvin pressed his knee against the neck of George Floyd, a black man who was unarmed. Chauvin pressed his knee to Floyd’s neck “for a total of nine minutes and 29 seconds during an arrest outside a Cup Foods grocery store”.

In April 2021, Derek Chauvin was found guilty of three counts of homicide and manslaughter.

He is now serving two prison sentences at the same time, for a total sentence of more than 22 years. Three other officers involved in George Floyd’s death received lighter sentences.

On October 3, the American singer was in Paris to attend the show of his brand, Yeezy.
On that occasion he wore the T-shirt with the words “White Lives Matter”, a clear and provocative reinterpretation of the slogan “Black Lives Matter”.

After countless protests arose, West remarked on his thoughts, writing in an Instagram story: “Everyone knows Black Lives Matter was a scam. Now it’s over, please. ‘
The unhappily mangled t-shirt was worn by West and influencer and activist Candace Owens (who stood alongside the rapper-entrepreneur).

Adidas has blocked the deal with the rapper

Following the “White Lives Matter” T-shirt scandal, sportswear brand Adidas announced that it has blocked its partnership with the rapper, banning the line of sneakers of his brand (Yeezy).

In the press release with which the sportswear company makes it known that it has blocked the agreement, the episode of the writing “White Lives Matter” (which means “the lives of whites are worth”, as “Black Lives Matter” is not explicitly mentioned. stands for “black lives are worth”).
However, the aforementioned press release underlines that “partnerships that work are linked to mutual respect and shared values”, therefore with clear reference to what happened a few weeks ago during Paris Fashion Week.