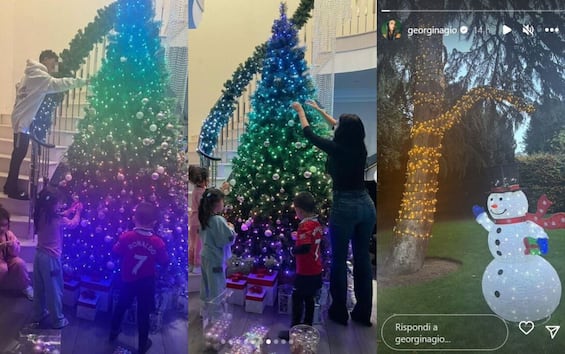 Missing a month and a half a Christmas but at the home of Cristiano Ronaldo And Georgina Rodriguez it seems that the holidays have already arrived. The soccer champion certainly does not have the thought of too expensive bills, as evidenced by the extraordinary luminous decorations with which he has already decorated his home for the joy of the children. To share the images of the decorations were the same Georgina and Cristiano, who were filmed while, together with their children, they were completing the Christmas decorations. At home, Ronaldo just expected to let Halloween pass to start the Christmas celebrations.

The decorations of the Ronaldo house

Even if Europe is in an energy grip due to the crisis, which is bringing families and businesses to their knees, this is not a problem for Cristiano Ronaldo, who goes against the trend and lights up his home and garden with decorations cheerful and fun. There is also a large Christmas tree, a fir, which Georgina decorated with her children, full of lights and sparkling decorations, as well as other decorative elements that contribute to making the house already in the mood with the arrival of Christmas. , even if the party is more than a month away. In the garden, then, a large illuminated snowman makes a fine show, which further increases the Christmas atmosphere.

The decorations all together: the entire Ronaldo family

Georgina Rodriguez and Cristiano Ronaldo have been a steady couple for 6 years. The former saleswoman is also a mother for the children that Cristiano Ronaldo had before their meeting and everyone was involved in the creation of the Christmas decorations. In the images, in fact, we see Georgina Rodriguez surrounded by children decorating the Christmas fir while in the garden, in addition to the large snowman, a pine trunk has been decorated for the holidays. The festive atmosphere is also breathed through the images shared on social networks, which reveal the light-heartedness of a lucky family, who loves to share even these little joys.