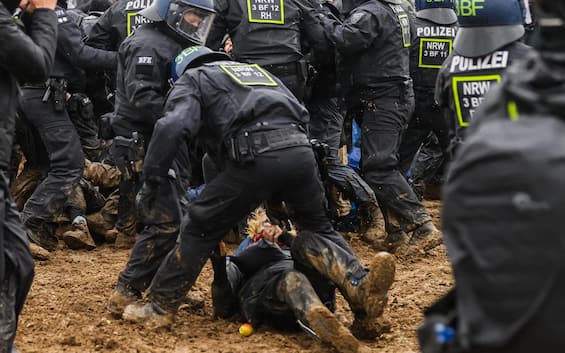 Violent clashes between law enforcement and eco-activists in Lutzerath, Germany. The site located in the Rhine basin between Dusseldorf and Cologne is to be reclaimed to allow for the expansion of the lignite mine operated by the German energy company RWE. Policemen in riot gear with helmets and shields, against the activists who occupy this abandoned village. About ten thousand anti-mining demonstrators have been demonstrating for days to prevent the coal mining of the energy giant. “The vast majority of people are peaceful, but there are extreme elements, such as black blocks, which fuel the unrest.” This was reported to the Ansa press agency by the spokesman of the Aachen police, Dietmar Bruening. There were rockets and stones thrown at officers who had to use pepper spray to defend themselves. Activist Greta Thunberg also arrived on the spot: “Germany pollutes, it has great responsibilities”.

I clear it out

Meanwhile, the operations to clear out the activists who have been on the spot for days are going on. Particularly challenging was the evacuation of a tunnel in which several demonstrators gathered and refused to leave. According to police numbers, around 470 activists have already left the Luetzerath site. There would now be only about twenty occupants inside the mine which will be used for the extraction of coal by the energy giant Rwe.

Greta sticks Germany: “It pollutes, it has great responsibility”

Greta Thunberg also arrived on the spot, which is located in the state of North Rhine-Westphalia, to personally express her support for the cause. “It is shameful that the German government makes agreements and compromises with companies like RWE,” she says. “The coal of Lutzerath must remain in the ground” Greta told the demonstrators, asking that the climate not be sacrificed “to short-term growth and corporate greed”. Then Germany’s wand: “It pollutes, it has a great responsibility”. And again addressing the demonstrators: “You are proof that the changes will not come from those in power, from governments or companies, from so-called leaders. No, the leaders are here. They are the people who sit in the tree houses and who have been defending Luetzerath for years”, adds Greta who promises: “This fight is not over”.