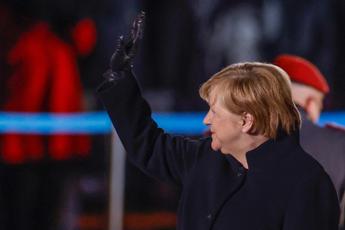 “In 16 years she has been tested as a chancellor and as a human being,” he said at the end of mandate ceremony. The handover to Olaf Scholz next week

I wish the future coalition, led by Olaf Scholz “all the best, the best of luck and a lot of success”. This was said this evening by German Chancellor Angela Merkel during the farewell ceremony to the armed forces, which was attended by Scholz, who will succeed her at the helm of the federal government of Germany next week.

“My 16 years as Chancellor have been full of events and challenges. They tested me both as a chancellor and as a human being. at the same time they gave me a sense of fulfillment, “Merkel said. The chancellor recalled the difficult moments of the financial and economic crisis in 2008 and that of migrants in 2015, which made it clear” how international institutions and instruments are indispensable in order to face the great challenges of our time, climate change, digitization and migration “.

And finally he recalled that “our democracy also thrives on the fact that it finds its limits where hatred and violence are considered legitimate means of imposing one’s own interests”.

The Bundeswehr greeted the Chancellor with the “Grosse Zapfenstreich”, the greatest military honor granted to the civil authorities, whose origins date back to the 16th century. The ceremony, tonight with a small number of guests due to covid, always takes place after sunset, with a parade by torchlight and various musical pieces, including the national anthem. Some of the songs were personally chosen by Merkel: a religious hymn, “Grosser Gott, wir loben Dich” (Great God, we praise you), as well as the 1992 song “Fur mich soll’s rote Rosen regnen” (They rain red roses for me) by Hildegard Knef.

But the Chancellor also chose the notes of a punk song: “Du hast den Farbfilm vergessen” (You have forgotten the color film), a song by Nina Hagen which in 1974 had great success in East Germany, where a young Angela then lived. Twenty-year-old Merkel.