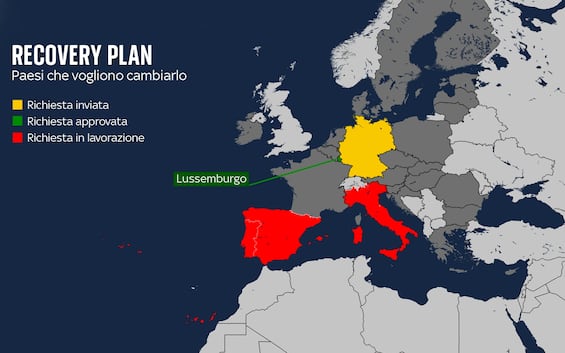 The Germans are asking for two minor changes, while Luxembourg is the first country to see the request for a revision of the recovery plan approved. THE SKYWALL

Italy is not the only country to reflect on a change to its Pnrr (SKY TG24 SPECIAL). Germany has in fact sent a request to change its plan to the European Commission, which will now evaluate it, as anticipated by Sky TG24.

Luxembourg the first to send the request

The Germans are not the first to take this step. Luxembourg had forwarded its own proposal at the beginning of November which has already been accepted by the Brussels offices and will now have to be examined by the representatives of the member states. In fact, Luxembourg had to deal with a reduction in the money available – which went from just over 93 million to almost 83 due to better-than-expected economic growth – and has therefore presented a revised version of the plan to deal with it. He proposed scrapping a digital skills training program for workers, as there would not have been enough unemployed to engage given economic growth. It is therefore a minor revision, which was accepted without criticism by Brussels.

Germany also intends to change two very limited passages of its recovery plan. The first concerns a program for the digitization of the railway networks: the Germans have asked to postpone the expected date of completion of the works of one of seven projects, due to “exceptional delays”. The second is instead linked to Covid and the vaccine development program. Since only one of the three participating companies actually applied for approval to the European Medicines Agency, the use of funds has been lower than expected.

As is clear, in both cases these are very different revisions compared to those that Italy would be preparing to carry out. According to government funds, the works at risk of delay referred to the Pnrr would be worth more than 40 billion. The work on nursery schools and kindergartens – for which Europe has allocated 4.6 billion euros – is just the most striking example.

Our country – with another dozen governments that are reportedly reflecting on changes, including Spain and Portugal – is expected to be waiting for the green light from RePower Eu to proceed.

In fact, the European energy plan provides that member countries can benefit from new funds – among those not initially requested – to deal with the energy emergency and the climate transition. To do this, they will have to send a modification proposal to their recovery plan, to which a new chapter will be added. This is why several countries, including Italy, plan to request the revisions at the same time as the proposal for the allocation of the new funds, to avoid opening two parallel procedures.

The European institutions have finally found an agreement on RePower Eu, and now the States will have 30 days from the entry into force of the regulation, expected in January, to declare if and how they intend to use the funds to finance energy projects.