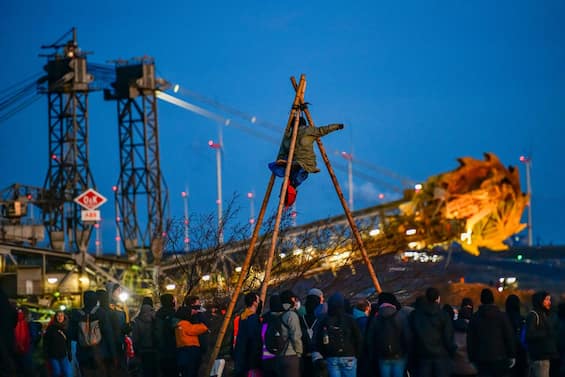 The West German village of Luetzerath has been gradually abandoned by its original inhabitants, as it is due to be demolished to make way for an extension to the Garzweiler II lignite mine. It is located a few hundred meters from a vast shaft where German utility giant RWE extracts lignite coal to burn in nearby power stations. Yet Germany is trying to get rid of the use of coal by 2030, because it is considered one of the most polluting fossil fuels. But the energy crisis that broke out after the war in Ukraine (LIVEBLOG) has created various obstacles and inconsistencies in the management of fuels.

Environmentalists, who moved into the former residents’ abandoned homes two years ago, warn that the coal would release millions of tons of carbon dioxide that warms the climate and is, therefore, a danger to air pollution. The ecological group LuetziBleibtfurthermore, he calls for “a change in the current economic system, with the already present climate catastrophe, which is already hitting hard the people in the Global South, who did not cause it”. But the Heinsberg county administration has now given the green light to the police to evict the occupiers from today, Tuesday 10 January. “We will definitely not budge,” promised activist Johanna Inkermann, “we will continue to stand in the way of the destruction that is taking place here, we will defend this village and we will stand up for climate justice.” A study by the German Institute for Economic Research (DIW) claims that lignite coal under Luetzerath was unnecessary to secure the German energy supply, even in the absence of Russian gas. Protesters believe Germany can find ways to get by without coal.