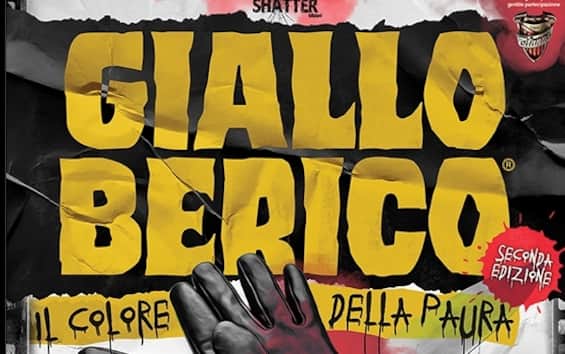 GIALLO BERICO is back on stage with a thrilling second edition. Promoted by SHATTER Edizioni, the Kermesse which will take place at the Sala Maggiore in Ponte di Barbarano, in the province of Vicenza, on 18 February 2023, will see the participation of numerous exceptional guests, including directors, screenwriters, actors, writers and investigators

During this second appointment, the event, with free admission, upon reservation, will pay homage to the Italian master of thrill Lamberto Bava, director of authentic masterpieces appreciated all over the world such as the saga Demonsit’s still Macabre, The house with the staircase in the dark, Body Puzzles and many others.

Lamberto Bava will be a guest at “GIALLO BERICO”, which will pay tribute to him through the screening of the documentary, signed by Paola Settimini and Daniele Ceccarini, Burr Puzzles, true portrait of one of the biggest names in thriller/horror made in Italy. Also present is the director of the documentary who, together with Lamberto Bava, will meet the public to present the work. But the tributes to Bava’s cinema do not end there, and the more adventurous will be able to attend, at midnight, the screening of his cult thriller Body Puzzle (Mystery).

As in the successful first edition, the event will not fail to celebrate the undisputed master of thrilling Dario Argento, and will do so during the evening with

a special event on Darkness, cult film to which the screenwriter Antonio Tentori and the film critic Roberto Lasagna have dedicated, on the occasion of the fortieth anniversary, a volume, published by SHATTER Edizioni, entitled “TENEBRE – under the eyes of the assassin” (October 2022).

Courtesy of Titanus, Argento’s bloodthirsty film will be screened and followed by an unmissable appointment which will see the participation, directly from the film set, of the actress Mirella D’Angelo who, in the 1982 film, plays the journalist Tilde. Her terrified look behind the blouse ripped open by the killer’s razor has now become iconic and representative of the film in the world. A unique opportunity to take part in exclusive anecdotes and memories of the actress on the set of Tenebre, and attend the presentation of the book signed by Antonio Tentori and Roberto Lasagna, guests of the event.

Antonio Tentori, co-wrote the screenplay of Dracula 3D (2012) by Dario Argento, as well as having collaborated over the years with the biggest names in Italian thrill-seeking: Bruno Mattei, Lucio Fulci and Joe D’Amato, to name a few.

Not just cinema and fiction, though. Indeed, “GIALLO BERICO” will reserve a section also for the disturbing cold-case, sadly known as “THE MONSTER OF UDINE”.

A trail of blood, still without culprit today, which shocked the whole of Italy, with the serial killer who terrorized the Friulian city for two decades and committed 9 bloody crimes. A docu-series, directed by Matteo Lena, was dedicated to the serial murderer and aired on Crime+Investigation.

The director and Edi Sanson, carabiniere at the time of the events in service at the investigative nucleus of Udine, will be guests of the event to bring their respective testimonies on what has been defined as “one of the most ferocious Italian cold-cases”.

The event, which will begin at 16.00, will see at the opening, for the RED BLOOD INK session, the presentation of the essay, written by Riccardo Antoniazzi and published by SHATTER Edizioni, “HANNIBAL – from the big to the small screen: guide to the complete saga”.

The artistic direction of “GIALLO BERICO” is by Nico Parente.

For info and reservations: [email protected]