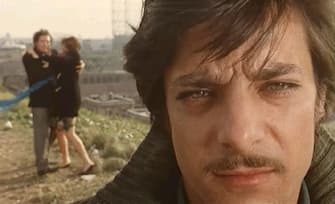 Drama of jealousy (all details in the news), directed by Ettore Scola (1970). Thanks to the character of the Tuscan pizza chef Nello Serafini, Giancarlo Giannini brings to the big screen for the first time that passionate and unpredictable underclass figure that he will develop in subsequent films. The dialogues with the other 2 protagonists are memorable. Monica Vitti and Marcello Mastroianni

Monica Vitti, thus began “The Adventure in the World” of cinema with Michelangelo Antonioni

Metallurgical Mimì wounded in honor, directed by Lina Wertmüller (1972). The film marks the meeting between Giancarlo Giannini and the great Italian director. Together they will shoot 9 films. Thanks to the interpretation of the Catania laborer Carmelo Mardocheo, nicknamed Mimì, the actor wins the David di Donatello. The duets with Mariangela Melato with whom Giannini will act in 3 other feature films are amazing

All about Mariangela: an exciting biography of the diva Melato

The first quiet night, directed by Valerio Zurlini (1972). In the role of the doctor Giorgio Mosca, known as “Spider”, who hides a sensitive soul and a great culture behind a cynical and superficial appearance, Giancarlo Giannini is the perfect counterpart to Daniele Dominici, the character played by Alain Delon

Alain Delon, the most beautiful photos

Film of love and anarchy – Or “This morning at 10 in via dei Fiori in the well-known brothel …”, directed by Lina Wertmüller (1973). The Lombard peasant Antonio Soffiantini, known as “Tunin”, who goes to Rome with the intent to assassinate Mussolini and ends up falling in love with a prostitute is one of the most memorable characters played by Giancarlo Giannini. It is no coincidence that the actor was awarded at Cannes for the best male interpretation

Farewell to Lina Wermuller, all the films of the director

Paul the heat, directed by Marco Vicario (1973). Giancarlo Giannini plays the role of Paolo Castorini, in this cinematographic transposition of the posthumous novel of the same name by Vitaliano Brancati. A story set in Catania and Rome at the turn of the Second World War and based on the theme of sexual passion and lust

All the news about Dino Risi

Overwhelmed by an unusual fate in the blue sea of ​​August, directed by Lina Wertmüller (1974). Gennarino Carunchio, the Communist Sicilian sailor who has an affair on a desert island with the rich borgese Raffaella Pavone Lanzetti (Mariangela Melato), is perhaps the most famous character played by Giancarlo Giannini

From 007 to “Overwhelmed by an unusual destiny”, 10 films set in Sardinia

Pasqualino Settebellezze, directed by Lina Wertmüller (1975). Giancarlo Giannini got an Oscar nomination for Best Actor thanks to this film which was also nominated as Best Foreign Language Film, Best Direction and Best Original Screenplay. The actor said in an interview: “I am very fond of Pasqualino because it is a true story that we discovered almost by chance. And I, that man, really knew him. Then I also interpreted him”

The best films of Giancarlo Giannini

Picone sent me, directed by Nanni Loy (1984). David di Donatello as Best Actor to Giancarlo Giannini who falls to perfection in the role of the Italsider worker Pasquale Picone

Ternosecco, directed by Giancarlo Giannini (1987). In the film that marks his debut as a director, Giancarlo Giannini plays Domenico Aniello “Capatosta”, Mimì for intimates, famous for being able to translate dreams into playable numbers

‘Hours, directed by Luigi Magni (1989). Giancarlo Giannini is Francesco II of Bourbon, king of the Two Sicilies ousted by Garibaldi and forced to leave his capital, he spent his exile in the papal city. For this performance the actor got a David di Donatello nomination

The unworthy uncle, directed by Franco Brusati (1989). Giancarlo Giannini plays Riccardo, a quiet but repressed man who unexpectedly meets his uncle, an unrepentant and dissolute libertine who has the face of Vittorio Gassman

The dark evil, directed by Mario Monicelli (1990) Giancarlo Giannini is the protagonist of this film version of the novel of the same name by Giuseppe Berto. As Giuseppe Marchi, an unsuccessful frustrated screenwriter, the actor offers a moving portrait of a man suffering from depression

Palermo Milan one way, directed by Claudio Fragasso (1995). Giancarlo Giannini plays the repentant Turi Arcangelo Leofonte, nicknamed “the accountant of the mafia” due to his relationship with organized crime

Celluloid, directed by Carlo Lizzani (1996). Giancarlo Giannini wins the David di Donatello, thanks to the interpretation of the character of Sergio Amidei, Italian screenwriter and film producer. Lizzani’s film tells the genesis of Rome open cityforeman designed by Roberto Rossellini

The sirocco room, directed by Maurizio Sciarra (1998). Silver Ribbon as Best Actor Giancarlo Giannini who in this film based on the novel by Domenico Campana plays the role of the Marquis of Acquafurata, an aristocrat who, to escape the fascist persecution, takes on the identity of his butler who died in a fire

Hannibal, directed by Ridley Scott (2001). In this thriller that is part of the saga of The Silence of the Innocents, based on the novels of Thomas Harris, Giancarlo Giannini is the police inspector Rinaldo Pazzi (descendant of Francesco de ‘Pazzi). The commissioner discovers that Hannibal Lecter lives in Florence under the false name of Doctor Fell

I love you Eugenio, directed by Francisco José Fernandez (2002). Unforgettable and poignant acting performance by Giancarlo Giannini who plays Eugenio, a volunteer in a hospital and suffering from Down syndrome. Thanks to this film, the actor won the David di Donatello for best protagonist

God’s bankers – The Calvi case, directed by Giuseppe Ferrara (2002). Taken from the book of the same name edited by Mario Almerighi, this biopic tells the story of the Banco Ambrosiano crack. Giancarlo Giannini plays Flavio Carboni, a fixer at the center of many of the great Italian mysteries

Casino Royale, directed by Martin Campbell (2006). In the twenty-first installment of the 007 film series, as well as the first film with Daniel Craig as the secret agent of MI6 James Bond, Giancarlo Giannini plays the character of René Mathis, an MI6 agent stationed in Montenegro, who has the task to help James Bond on his mission to frame the shady international banker Le Chiffre. Giannini will return to play Mathis in Quantum of Solace